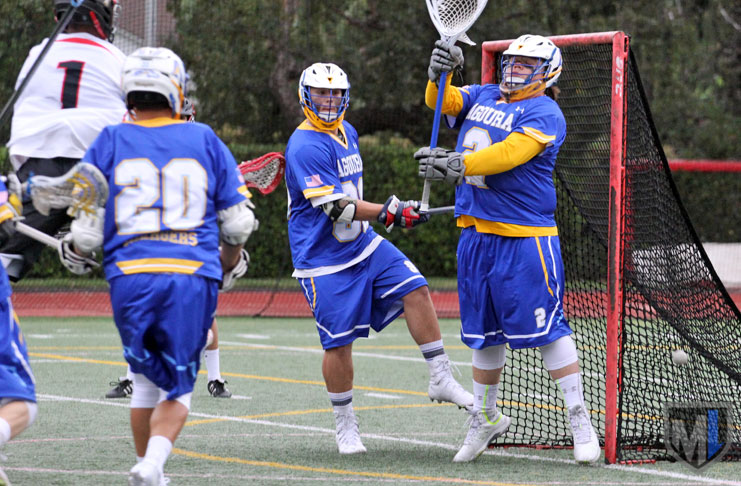 With an eye on continued improvements to player safety and reducing the risk of injury, the National Federation of State High School Associations (NFHS) announced six rules changes in boys lacrosse for the 2017 season this week, the most significant of which prohibits any player besides the goalie from being located in the crease with the intent of blocking a shot or acting as goalkeeper.

The image above illustrates the situation (apologies to Agoura High School and goalie Jason Pawlak, but this is the only image in MaxLax’s files that clearly shows it). Though the shot is heading wide to Pawlak’s left (see the ball, just above the MaxLax logo), the defender to Pawlak’s right is inside the crease and, in the future, will be considered to be in an illegal position.

Here’s the text from the NFHS release:

“With the addition of Article 4 to Rule 4-18, no defensive player, other than a properly equipped goalkeeper, can enter his own crease with the intent of blocking a shot or acting as a goalkeeper. If another defensive player enters the crease, officials will stop play as soon as they notice the situation; however, if a shot is already in flight when this is noticed, the shot will be allowed to come to its normal conclusion before the whistle blows to stop the play.”

Two other changes that could be significant:

The full report on the rules changes is available at NFHS.org.