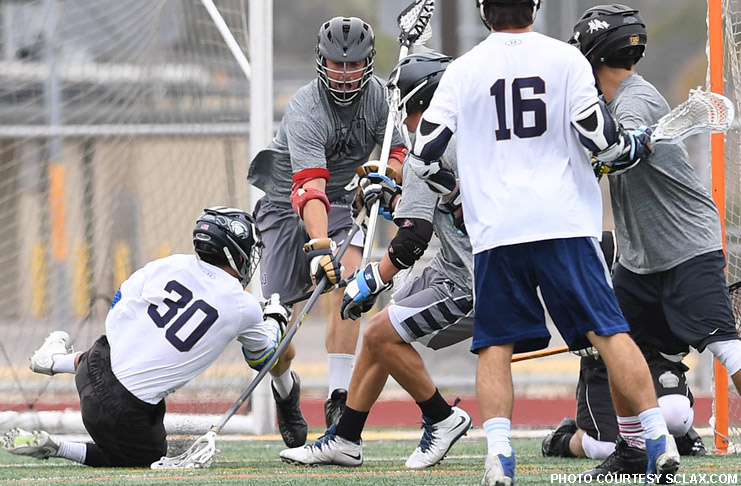 The SCLAX post collegiate men’s lacrosse final four is set following playoff victories Sunday by Newport Beach in the North Division and San Diego LC in the South. Newport advances to meet North No. 1-seed Beverly Hills, while San Diego will face South No. 1 40 Thieves, with the winners of the semifinals squaring off for the SoCal Championship.

Newport Beach, the No. 3 seed in the North, trailed No. 2 South Bay 4-2 at halftime Sunday but rattled off four consecutive goals in the third period to take a 6-4 lead in what became a 8-7 victory. South Bay had the ball in the final seconds, but a final shot went wide.

With the win, Newport earns a shot at Beverly Hills in the North Finals for the second year in a row. Last year, Beverly Hills traveled to Newport Beach and won, sending the Bucks to the SoCal Finals. This year, Beverly Hills benefits from both a week off and a game at its Culver City HS home field. The teams split their regular-season games this year, with Newport winning in five (5) overtimes March 26 and Beverly Hills winning May 21.

In the South, San Diego survived a see-saw battle with Quiksilver, finally walking away with a 9-8 overtime victory. Quiksilver led most of the way, including a two-goal cushion at halftime. As the second half began, though, San Diego settled down and turned up its defense, led by several doorstep saves by their goalie.

The teams were tied most of the fourth quarter, but San Diego took its first lead at 7-6 with about three minutes left. Quiksilver rallied with two goals to take an 8-7 lead with just 30 seconds to play, but San Diego won the ensuing face-off San Diego and came out of the scrum with a fast-break goal in the closing seconds to force overtime.

The teams traded possessions early in the overtime, but a big forced turnover by San Diego’s close defense led to a slow break, a face-dodge and a goal for the win.

San Diego will now travel to face 40 Thieves on Sunday. The Thieves have won the South Division the last two years and swept San Diego this season, winning 14-8 and 17-7.

Information and photo provided by SCLAX.com.