Newport in Position for Second Seed in North 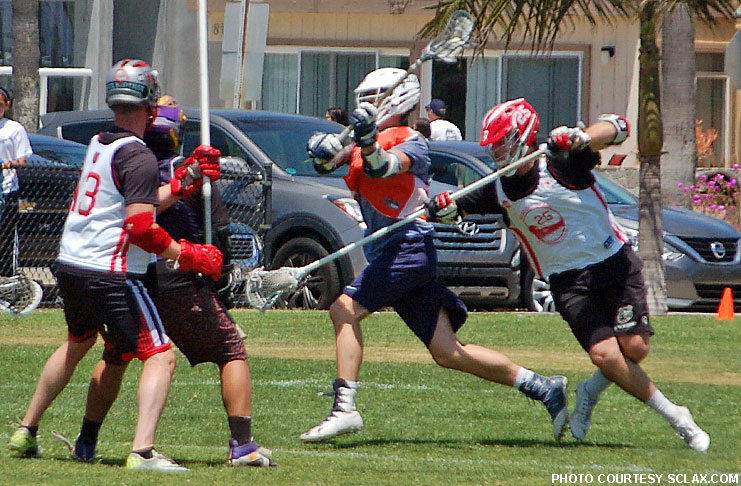 With a 14-7 win over South Bay on Mother’s Day, Newport Beach put itself in position to earn one of the two remaining North Division playoff berths in the Southern California Post-Collegiate Men’s Lacrosse League.

The SCLAX post-collegiate league was mostly quiet Sunday, but Newport and South Bay needed to squeeze in game that had been rescheduled from earlier in the season. Newport’s victory leaves the teams tied for second place in the North at 5-4, with Newport holding the tie-breaker by virtue of their goals differential advantage in the season split. South Bay won the previous matchup 10-5.

The top three teams from the division earn playoff spots, and Beverly Hills already has clinched the top spot at 8-1. Newport plays at Beverly Hills on Sunday and can clinch the No. 2 playoff seed with a win. Newport handed the Bucks their only loss earlier this season in a five-overtime marathon. South Bay also can clinch a playoff berth by beating Venice on Sunday.

Losses by either Newport or South Bay on Sunday will open the door to tie-breaker chaos.

With a playoff berth in play Sunday against South Bay, Newport Beach wasted no time. Sean Speciale ripped one past South Bay keeper Joseph Viola at the 15:20 mark. Crawford McCarthy followed with another score at the 12:40 mark, and one minute later Speciale notched his second from the midfield after a clean face-off win. All of the sudden, Newport was up 3-0.

But South Bay fought back, scoring the next three goals starting with a tight inside roll by Oris Williams at the 9:10 mark. Stony Brook’s Andrew Dorsey followed a minute and a half later, and Yale’s Shane Carr tallied the final score of the quarter and it was knotted at 3-3 after one.

The second quarter was all Newport, with McCarthy and Chapman’s Andrew Bohl each scoring to push the lead back to two goals at 5-3, while Newport Beach keeper and Chapman alum Gus Gradinger kept the South Bay squad off the scoreboard. Newport took that 5-3 lead into halftime.

The third quarter opened with one of those rare “lax happenings” as second-half South Bay keeper Carder Nastri (USC) made a spectacular save but had the ball roll out of his stick into the cage as he prepared for a long clearing pass. That own-goal made it 6-3, and Cal-State Chico’s Alex Elson made it 7-3. High Point’s Mitch Dupere got South Bay on the board with a dramatic face dodge, cutting the Newport lead to 7-4. The teams traded scores by Andrew Bohl and Shane Carr, but Bohl tacked on two more goals, assisted by Ryan Hellmich (Chapman) and Connecticut College’s Mike Brennan, making it 10-5 heading to the fourth quarter.

Newport Beach began to pull away, getting a goal from Hellmich off a clean face-off win three minutes into the quarter and another McCarthy goal at the 10:50 mark. South Bay answered with a Mitch Dupere goal, but Newport goals by Tim Gonzales, Alex Elson and Connor Glackin ended any chance of a comeback.

Article and photo contributed by SCLAX.com.