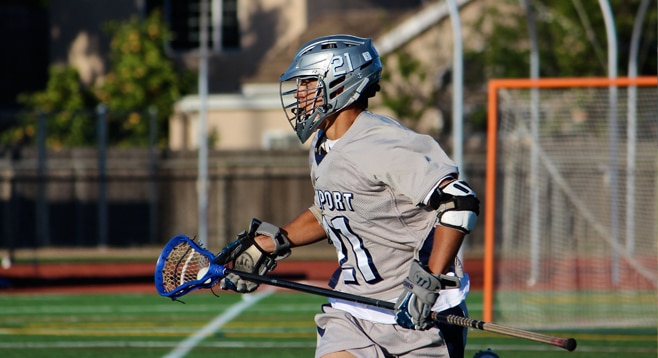 Newport Harbor beat Marina last night for a much needed conference win. With five more to play, the snake-bitten Sailors hope to finish strong, win out, and build momentum for the playoffs.

Some might say that if it weren’t bad luck, the Newport Harbor Sailors, would have no luck at all this season. Consider these team losses: two games in overtime (St. John’s of Houston and Mater Dei), and one in the final seconds of regulation to Trabuco Hills; compounded player losses to three broken collar bones, a fractured elbow, a fractured vertebrae, a broker hand, and kidney stones suffered by seven respective players and you may begin to wonder if there is any hope at all for this program that graduated 24 seniors last season.

Well, after their first Spring Break without a single game played, the Sailors did some healing and regained their composure for a conference game against Marina High School. The much needed 11-4 win against the Vikings at their home field at Westminster High School was the Sailors first conference win of the season.

At the end of the first quarter it was 2-2 with the Sailors getting unassisted goals from senior captains Nate Chaness (2g, 1a) at midfield and by Kole Escher (3g) at attack. The Sailors started the second quarter man-down with their starting senior captain goalie Eli Guitierez (2 goals against, 3 saves) serving time after he responded to what he thought was a late hit to his head after the whistle ending the first quarter of play.

The dead ball foul led to sophomore goalie John Jasper, recently pulled up from the JV due to an injury, to start the second quarter and finishing out the game with two goals against, 12 saves and the game ball. At the half, Marina trailed Newport Harbor 4-2 after Jasper blanked the man-up opportunity and team play till the third.

Inspired by their Head Coach Ryan Abbate the Vikings came out fired up in the third and managed to put two quick goals on the board tying the game at four all, until late in the quarter when the Sailors responded with goals from junior attackman John Mooers (2g, 2a) and Alex Fuller (2g, 2a).

The fourth quarter was very competitive on ground balls, many of which were created by the Newport Harbor’s ride that prevented the Vikings from any fast breaks and gave them a difficult time on their clears. Those turnovers lead to Newport Harbor pulling away in the quarter with additional goals scored by senior captain midfielder and SMU commit Chis Buchanan (1g, 1a) and by senior midfielder Josh Ford (1g).

Sailors’ head coach Mark Todd said, “We are pleased with the competitive mindset established by our captains and by the team effort throughout the game. It was really evident from the play of the close defense (junior-Blake Lenk, junior-Liam Whelan, senior-Andrew Craft), all the way to the freshmen midfielders (PJ Steiner, Alex Pearce, Patrick Lynch, and Ryan Simons), but especially by the play of John Jasper between the pipes after coming in cold.”

With five conference games remaining the Sailors hope to finish the season at 8-8 and sneak into the playoffs with some momentum going in the right direction, but that’s going to take some luck which seems to have been in short supply for them this season.