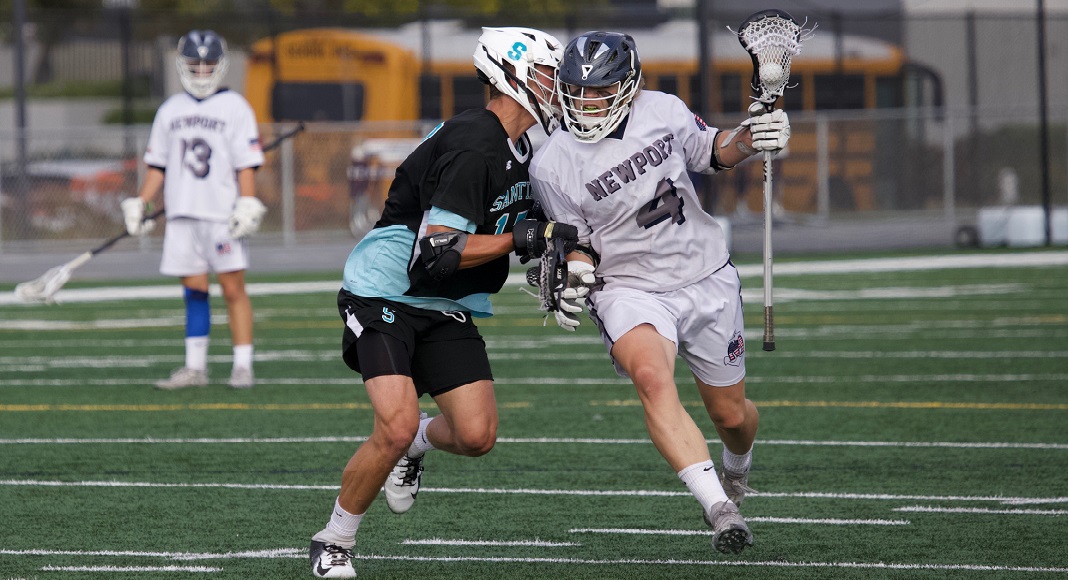 “The feel, the whole vibe on the campus, it [Bryant] feels like a complete sports college and you really can’t get a better coach in college than Mike Pressler,” Goltz said.

Devin Arkison of Lockdown D who first notified MaxLax of Goltz’s commitment said that Goltz carried that momentum into the summer and made a strong impression while playing for West Coast Starz at the NLF tournament this summer.

“Aiden stood out at the NLF tourney this summer and showed he’s D1 quality,”said Arkison.  “Being a two-sport athlete and having a reputation as a good kid around the field put him over the top with the Bryant staff.  He should continue to get better this season.”

Goltz also commented on the benefits of being a two-sport athlete.

“I think playing two sports, especially with football and lacrosse, they both kind of contribute to each other skill and athletic wise. What you’re doing in lacrosse is pretty much the exact same in what you’re football like running all the time and taking hits,” Goltz said.

“Since Goltz has joined the varsity he has come a long way as a leader and as a student of the game. He’s always prepared for our opponent and his prep-work helps out the other players too not only from his tutoring but also his example. He leads by example and it is no cliché here because he really does walk his talk and he even has seniors looking up to his leadership when he was a captain as a junior. All the kids respect him and hold him in high regard without him demanding. He just owns it with his hard work and poised stoicism,” Todd said.

Goltz started playing lacrosse about 10 years ago. According to Todd, Goltz played baseball prior to playing lacrosse, but got bored of the sport, thus switching to lacrosse.

“We put him in the goal because he could track the ball better than anyone, but he was such a good player outside of the net, always looking to be a part of the action all over the field even as a goalie, so we put him a midfield and have never looked back. Since his sophomore year he often takes an entire bucket of balls home over the weekend and takes 300-400 shots every weekend on his own,” Todd said.

Goltz joins Kevin Groeninger, a recent St.Margaret’s graduate and senior to-be Cole Garvey of Mira Costa as a commit to Bryant. Last year, the Bulldogs went 3-11 on the season and 1-5 in North East Conference play.