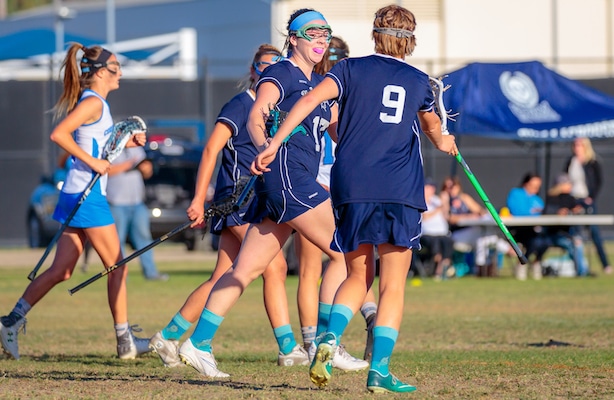 Newport Harbor made the trek to Temecula and earned its third straight victory, 11-4. Although senior Rylie Siegfried fed junior Katie Hendrix off the opening draw to earn the 1-0 lead, the flood gates did not open, and the Golden Bears settled in and controlled much of the first half. After falling behind 2-1, the Sailors girded up and clawed back to a lead behind goals from Siegfried and junior attacker Caitlin Dwyer. Hendrix gave Newport a 5-2 cushion on a smooth and aggressive drive, ducking under the low defense and splitting the slide for the close range ripper. The home team chipped one of the lead before halftime, to make the score 5-3.

The second half was all Sailors, as the defense played lights out ball. Anchored by seniors Hannah Sanders (nine saves, 69%) and Jordan Rausch, the Newport defense simply would not allow the Temecula Valley attack to develop any consistent threat. Meanwhile, the offense for NHHS went to work. Driving was the name of the game, and juniors Heather Roberts and Sarah Farley earned a spot in the book with a goal apiece. Dwyer added one more to her total, Hendrix finished with three goals and five draw controls, and Siegfried lit it up with four goals, an assist, and three draw controls.

Up Next: Newport visits Esperanza for their last game of the regular season on Thursday, April 28.