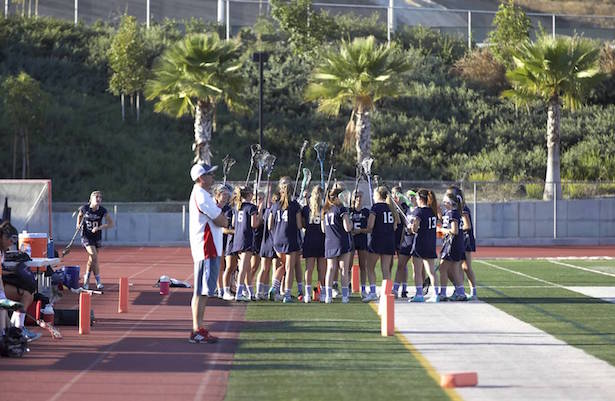 Those who like their game recaps under 140 characters need read only this: The Sailors won 14/14 draws behind senior captain Rylie Siegfried, who pulled down nine herself to lead the home team to a 9-3 victory.

The Sailors opened Tuesday’s game on their heels, as Esperanza capitalized on an early turnover to jump ahead 1-0.  In the early stages of the match, the Newport defense was put to the test—and they held off a relentlessly patient Aztec attack that owned possession.  At the half, the visitors had but two goals to show for their efforts.  Senior captain Jordan Rausch led the crew of Maxine Aiello, Jill Rosten, Adena Rothbard, and goalie Hannah Sanders through the perilous first half.  The “D” iced the victory by allowing only one goal off a free position in the second.

The Sailors ended their 36-minute scoring drought vs. Esperanza (dating back to 2015) with a sweet shot and goal from junior Sarah Farley off an equally sweet assist from junior captain Katie Hendrix.  Farley would ultimately net two and assist one; Hendrix would score one and assist a game-high three.  Junior Laura Tran put one away off a feed from Adena Rothbard to bring the Sailors back to a halftime tie, 2-2.

The visitors held strong through the next fifteen minutes, and the score was 3-3 with under ten minutes to tick.  The goal of the night, and eventual game winner, came just moments after the Aztecs tied it up: Siegfried stretched to take down the draw, barreled past three opponents, and hit junior Caitlin Dwyer as she wrapped the crease under duress from the goalie and a low defender, controlled the ball through a forest of sticks, moved to gain the angle, and finished with poise.  In the final five minutes, the floodgates opened and Newport rallied behind goals from junior Heather Roberts, Farley, Hendrix, and Siegfried—who finished with three goals and an assist.

Up Next: Newport Heads to Valencia on Thursday, April 14. Esperanza host El Dorado on the same day.