Newport Harbor girls soar past Chaminade in the first round 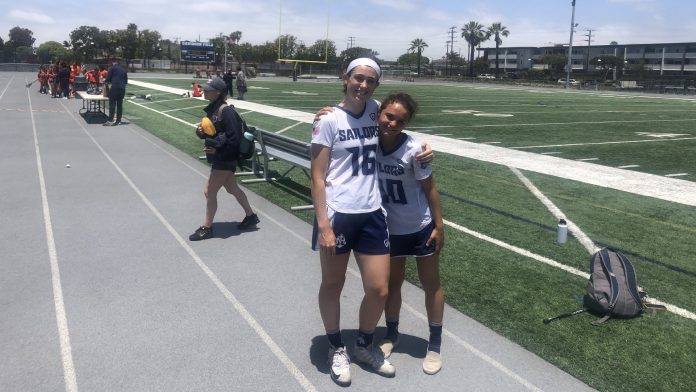 The Sailors (15-5) advance to the quarterfinals where they will play top-seeded Foothill at home on Tuesday at 7 p.m. The Knights Defeated JSerra 19-9 on Friday in their first round game.

Olivia Gritzmacher led Newport Harbor with four goals while Mary Jones and Brooklyn Matousek (pictured right) each had three goals. Joelle Rothbard and Willa Rath (pictured left) each had two goals for the Sailors, who got five saves from Lucy Valdes.

“We came out as a team and we focused on coming out strong and setting the pace of the game,” Sailors coach Brooke Martini said.

Newport Harbor wasted no time getting on the board as they scored nine seconds in courtesy of Rothbard. It then followed that up by scoring seven and leading 8-0 at the 14:40 mark, forcing an Eagles time out.

Eventually, the Sailors went up 15-0 at halftime, as they held Chaminade to only two shots in the first half. The Sailors in the first half also got other players involved such as Caroline Close, Caley Russell, Lucy Toohey, Catherine McCrory and Sophia LeClaire each found the back of the net once.

“We just continued moving our feet, cut through and created space for each other,” Martini said.

The Eagles didn’t score until the early stages of the second half, as Ella Batarse scored after going coast-to-coast from midfield and scoring. Madison Langewich also scored for the Eagles as she scored in the last five minutes of regulation, but at the point, the game had already been decided.

“In terms of her attitude and her leadership as a freshman, I am so lucky to have her [Rangel]. I’m proud of the way we fought against a very excellent ballclub,” Eagles coach Scott Cohen said.

Cohen also made note that Rangel played despite having a sprained thumb and wrist and that she was, in his belief, the best player on the field today. Rangel is excited for what the future has in store the Eagles.

“We’re all playing together again next year, so we’ll just grow closer and with coach Scott’s help, we’ll definitely work more on our stick skills and shooting and we’ll improve as the years go on,” Rangel said.

Newport Harbor, the Sunset League champion, now turns its attention toward Foothill in the quarterfinals. The Sailors have never beaten the Knights in its team’s history, but are hopeful to write some new history.

“I think that game is going to be a good, competitive game. We just have to come out strong and we need to play smart,” Martini said.