Newport Harbor Girls Get Back on Track against Tesoro 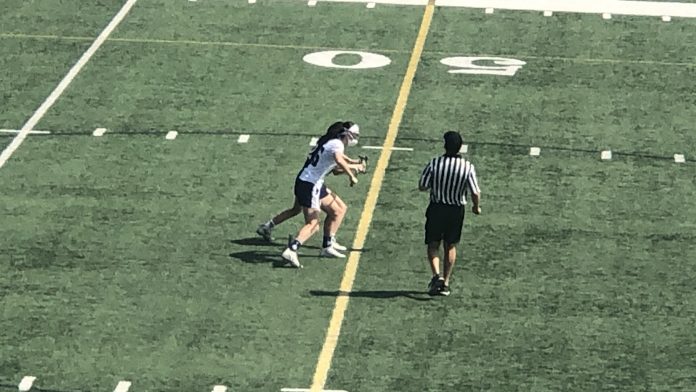 “I think today, we really worked on in practice just cutting and being open on offense and worked on our communication for defense. We came out a lot stronger and more confident in ourselves,” Sailors coach Brooke Martini said.

Newport Harbor left nothing to chance, as they opened the game with six straight goals. Jasmin Sharaf interrupted the run with Tesoro’s only goal of the half. Tesoro tried to contain the Sailors and their fast-paced tempo but the Sailors closed the half with seven unanswered goals to go into halftime up 13-1.

With the Sailors up by a good margin, Martini allowed Willa Rath (pictured in white), who had just moved to playing defender, take draw controls and play offense. Rath had a couple of good scoring looks that just went wide which had the home crowd buzzing with excitement.

Newport Harbor (3-3) is on spring break next week and will not have any games. Its next game will be on Tuesday April 13 at home against Esperanza at 6:30 p.m.

“Next week, we’re going to work on just playing as a team and keeping that positive energy going and going in strong into three games we when we come back,” Martini said.

The Titans (1-4) also got a goal from Maddie Brozey and got seven saves from Kaeley Hursh and three saves from Ashlee Dimaano. Tesoro’s next game is Monday at home against Corona Del Mar at 6 p.m.

Tesoro captain Ava Pinto liked what she saw from her team despite the loss, citing improvement on from the transitions down the field.

“We’re doing a good job of looking up and getting the ball to our middies. We got to definitely work on our clears, getting open for the goalie [when she has the ball], making sure we are looking up and know what plays to run,” Pinto said.