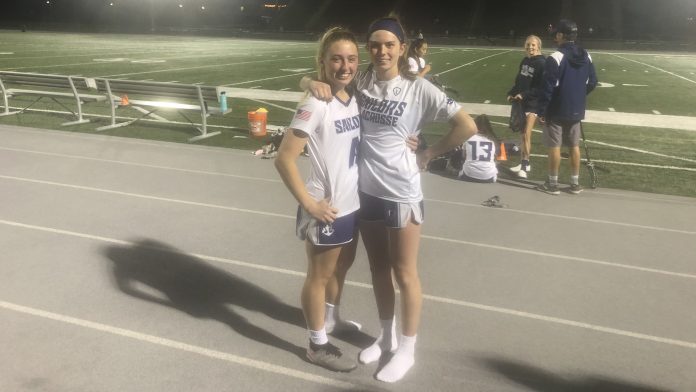 The 2021 CIF-SS girls lacrosse Division 1 playoffs will be featuring Newport Harbor, as it beat Los Alamitos 13-11 on Thursday at Newport Harbor High School. In avenging last Tuesday’s overtime loss to the Griffins, the Sailors have clinched one of two automatic qualifying spots in the Sunset League.

Joelle Rothbard (pictured left) and Olivia Gritzmacher (pictured right) led Newport Harbor with six goals each while Caroline Close added one goal. Rothbard and Gritzmacher both needed to step up their offensive output as the Sailors were missing Rowdy Farmer (concussion) and Mary Jones (sick), their third and fourth leading goal scorers on the team.

“We did switch up our offense a bit, but tonight we had to flip it and make our offense look more at who is our strongest drivers and who can go through three people,” Sailors coach Brooke Martini said.

Despite being short-handed, Newport Harbor started out strong, as it scored the first three goals with two courtesy of Gritzmacher and one courtesy of Rothbard and led 3-0. Los Alamitos didn’t get on the board until Sam Wehr scored at the 16:39 mark.

“We know that they basically run the same [isolation] play every single time, so we definitely did come into the game knowing what was going to happen and tried to prepare for them,” Griffins co-coach Kylie Otake said.

The Griffins’ offense countered with a balanced offensive attack, led by Wehr and Macie Buell, who each had three goals. Skyler Kustich and Elenie Burke both had two goals.

“I think we try and spread it out as much as possible. We’d rather have everyone work together as a team rather than focusing on two players,” Griffins co-coach McKenna Hurd said.

With the Sailors leading 4-1, things began to unravel for them, as their players began picking up yellow cards, which gave Los Alamitos an opportunity to turn the tables. At one point, Newport Harbor was down two players and the Griffins capitalized by scoring four straight goals, giving them a 5-4 lead.

Having accumulated three cards while Los Alamitos had the lead, Newport Harbor picked up a fourth yellow card at the 12:12 mark, leaving them down a player a rest of the way. Despite being down a player, the Sailors regained the lead at 6-5 courtesy of goals scored by Rothbard and Gritzmacher.

With two minutes in the first half, Los Alamitos scored the equalizer at the 1:56 mark courtesy of Wehr and took the lead at 8-7 with 59 seconds remaining courtesy of Burke. But a late hit from the Griffins after the horn sounded left them down a player to start the second half.

Newport Harbor took advantage of the situation, as Rothbard scored 35 seconds in, tying the game at 8-8. Los Alamitos didn’t let that deter them, as they killed their penalty and found Wehr open for the goal, retaking the lead at 9-8.

After the Griffins goal, they weren’t able to find the back of the net for 11 minutes and 36 seconds, as the Sailors’ defense did everything they could, without picking up a yellow card, to make sure that the Griffins couldn’t score. Offensively, Newport Harbor continued to ride the coattails of Gritzmacher and Rothbard, who helped give it the lead at 10-9 as Gritzmacher tied the game at the 20:53 mark and Rothbard gave them the lead at the 17:41 mark.

A little over two minutes later, Gritzmacher thought she had a breakaway goal from a pass Rothbard, but the shot was saved from point-blank range by Angel Bermudez. In a fortunate turn of events for the Sailors, the ball rolled over to Close who scored, giving them an 11-9 lead at the 15:15 mark.

Rothbard added a goal to give Newport Harbor a 12-9 lead, but a steal from Makenna Evans and a pass to Kustich for a Los Alamitos goal made the score 12-10. 14 seconds later, the Griffins scored again courtesy of Liz Shean, making the score 12-11 at the 10:53 mark.

Three minutes and 25 seconds later, Rothbard netted her sixth goal of the game, giving the Sailors a 13-11 lead at the 7:28 mark and a little bit more breathing room. The rest of the way, both teams’ defense did not make it easy on one another’s offense, as possession kept getting taken away or shots kept getting saved.

With about 2:30 left, Los Alamitos had possession and threatened to cut the lead down to a one goal game, but Gritzmacher intercepted a pass and ran it up the field and away from the opposing teams’ defense. Eventually, Newport Harbor ran down the clock and celebrated a hard-fought win.

“We played man down at least three-fourths of the game. As a team, we came together and we were like, ‘we can do this,’ and we played amazing defense and we communicated,” Martini said.

“If we played the last 10 minutes like we did like we did the first, it would’ve been a little different. I think we lost sight at working together just a little bit, lost the ball a couple of times and didn’t recover it as quickly as Newport Harbor did. Overall just a really tough game,” Hurd said.

The season has been a tough one for Los Alamitos, which has played the fewest overall games (9) of all of the teams in the Sunset League. Otake and Hurd said they have been patient and understanding with the players, as 12 of which did not get to play their junior year.

“We do a decent job of just remembering that these girls are coming back from a year in a pandemic and coming out of a year of being in their own mental hole,” Hurd said.

The Griffins are in a tough situation in terms of attempting to make the playoffs, as they have to win its last two league games and have Edison lose to the Sailors on Tuesday to force a tiebreaker game for the final spot or it’ll miss the postseason.