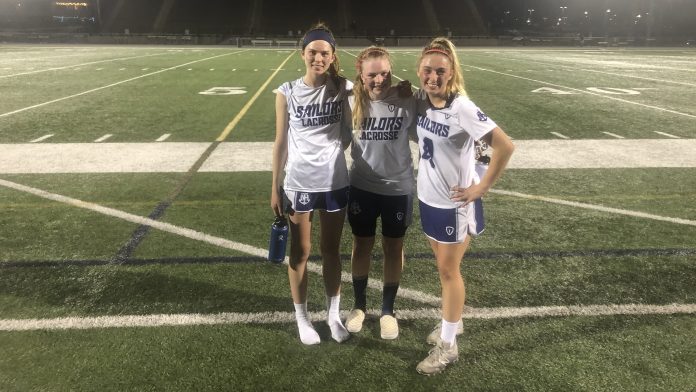 The Newport Harbor girls lacrosse team shut out Corona Del Mar in the second half to earn a 13-3 win on Thursday at Newport Harbor High School. The game was the Sunset League opener for both teams and in the first installment of the Battle of the Bay. In pushing their winning streak over their Back Bay rival to four, the Sailors also handed the Sea Queens their first loss of the season.

“We really played as a team today. We came out strong, we played the full 50 minutes of the game. The past couple of games like against St. Margaret’s, we were up 7-3 and second half, we didn’t come out strong, but in this [second] half, we came out strong,” Sailors coach Brooke Martini said.

The Sailors were anchored by Olivia Gritzmacher (pictured left), Lucy Valdes (pictured middle), and Joelle Rothbard (pictured right). Gritzmacher and Rothbard each had five goals and Valdes rejected seven of the 10 shots she faced. Rowdy Farmer chipped in two goals and Mary Jones added one to complete the Sailors scoring.

The Sea Queens opened the game applying the pressure defense that helped them enter the game with an 11-0 record and it appeared to be working with both teams having trouble maintaining possession. The Sea Queens grabbed its first and only lead of the game when back-to-back goals by Shelby Glabson and Frankie Garcia put them up at the 13:08 mark of the first half. CdM never found the back of the net throughout the remainder of the game.

“Turnovers I think the entire game really killed us. They [Newport Harbor] were good on draw controls and we did not have success with those tonight,” Sea Queens coach Jessica Murray said.

The Sailors tied the game at 3-3 off of a goal from Farmer, and four minutes after that, they took the lead for good, as Rothbard scored despite her team facing a man-down situation. CdM goalie Ellie Spotts (13 saves) did everything she could to keep her team in the game but with the offense struggling it was not enough.

“She was the most composed goalie I’ve ever seen to clear the ball after stopping it multiple times. Our team really gave her props tonight because she held our defense together and kept composed the entire game,” Murray said of Spotts.

Glabman, Garcia and Belle Grace each had one goal for CdM.

The second half saw Newport Harbor winning the draw controls more and turning up its defensive pressure while limiting mistakes. In addition to their second half surge, Valdes stepped up her game in the cage, as she recorded five saves in the second half, with two of them coming on back-to-back free position shots.

“Lucy is so confident in herself now, which really shows on the field because she has no fear when she steps into that net. She’s doing amazing, she works super hard in practice and she’s working on every single angle in the goal,” Martini said.

Unlike in boys lacrosse, the Sunset League in girls lacrosse has only four teams and two teams from that league automatically qualify for the playoffs. Should neither team finish in the top two in league, the two would have to finish with a record of .500 or better to apply as an at-large team for the playoffs in their respective division. As the only Division 2 team in the league, CdM with their current 11-1 record appear to be in a good place to earn an at-large bid to the Division 2 playoffs even if they do not finish as one of the top two Sunset League teams.

“We’re in a very hard league. I think the competition’s really strong and the great thing is in some ways, you get to play everyone twice,” Murray said.

The two teams will meet again on Tuesday May 11 at Corona Del Mar High School.

Next up for the Sailors (9-4), a road game against Los Alamitos on Tuesday in a Sunset League game. The Sea Queens (11-1) return to action on Saturday at Edison.