Newport Harbor Fights Off Challenge from St.Francis on Senior Night 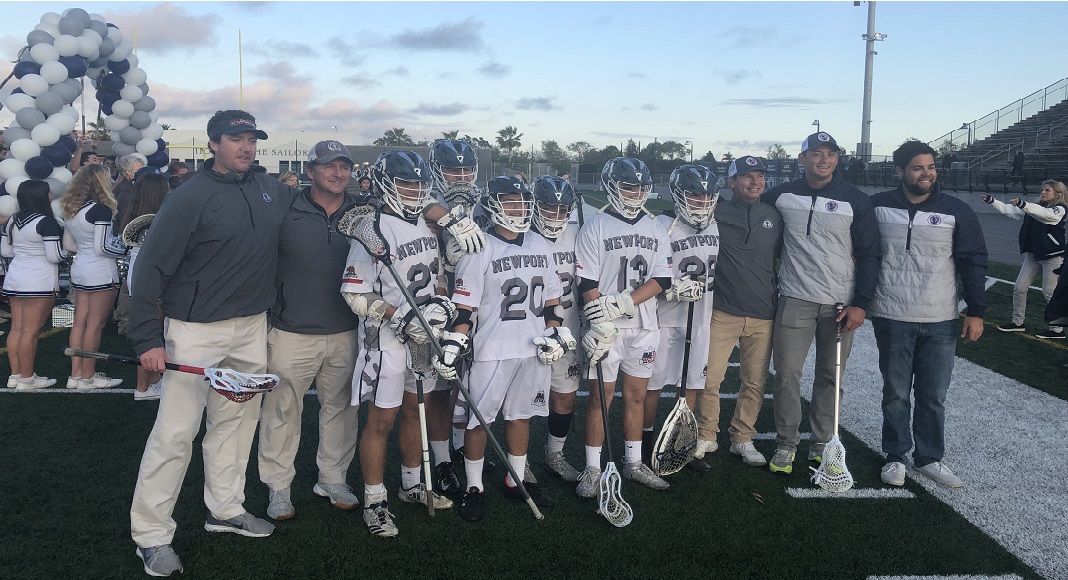 With all six seniors starting and the rust from an 11-day layoff still evident, the Sailors fell behind 4-0 and did not get on the scoreboard until until Rhett Farmer scored at the 7:42 mark of the first quarter.

“We had not practiced since our Los Alamitos win (on April 5). We have to play strong lacrosse for four quarters. We didn’t do that tonight,” Todd said.

Farmer’s goal seemed to wake up the Sailors from their Spring Break slumber and their offense started to flow.  The Sailor rattled off eight unanswered goals in a stretch that extended into the second quarter. The binge was assisted with a little divine intervention when a Farmer pass ricocheted off Jackson Sawall‘s  stick into the net to close out the first quarter.

A  Michael Lund goal finally put the Golden Knights back on the board in Q2 and sparked a run that allowed St. Francis to narrow the gap to a 10-8 deficit at halftime. However, the Golden Knights would not get any closer on this night.

Aidan Goltz came alive in the second half with four goals helping to ensure that St. Francis would not spoil Senior Night. The Sailors went on to win their ninth straight game in a physical affair, which saw the Sailors get penalized 10 times.

The Sailors (10-6) play at Beckman (6-4) on Thursday at 4 p.m. Todd’s goal for the Sailors, who are currently ranked eighth in the Orange County polls, is host a home playoff game, which they’ve never done in team history.

“The goal is to win out for the rest of the season, but we’re going to take it one game at a time. We’re going to focus on Beckman then we’ll turn our sites De La Salle [Monday] and Yorba Linda [next Wednesday],” Todd said.

St. Francis (7-8) concludes the regular season at home against Redondo Union (8-6) on Thursday at 7 p.m.