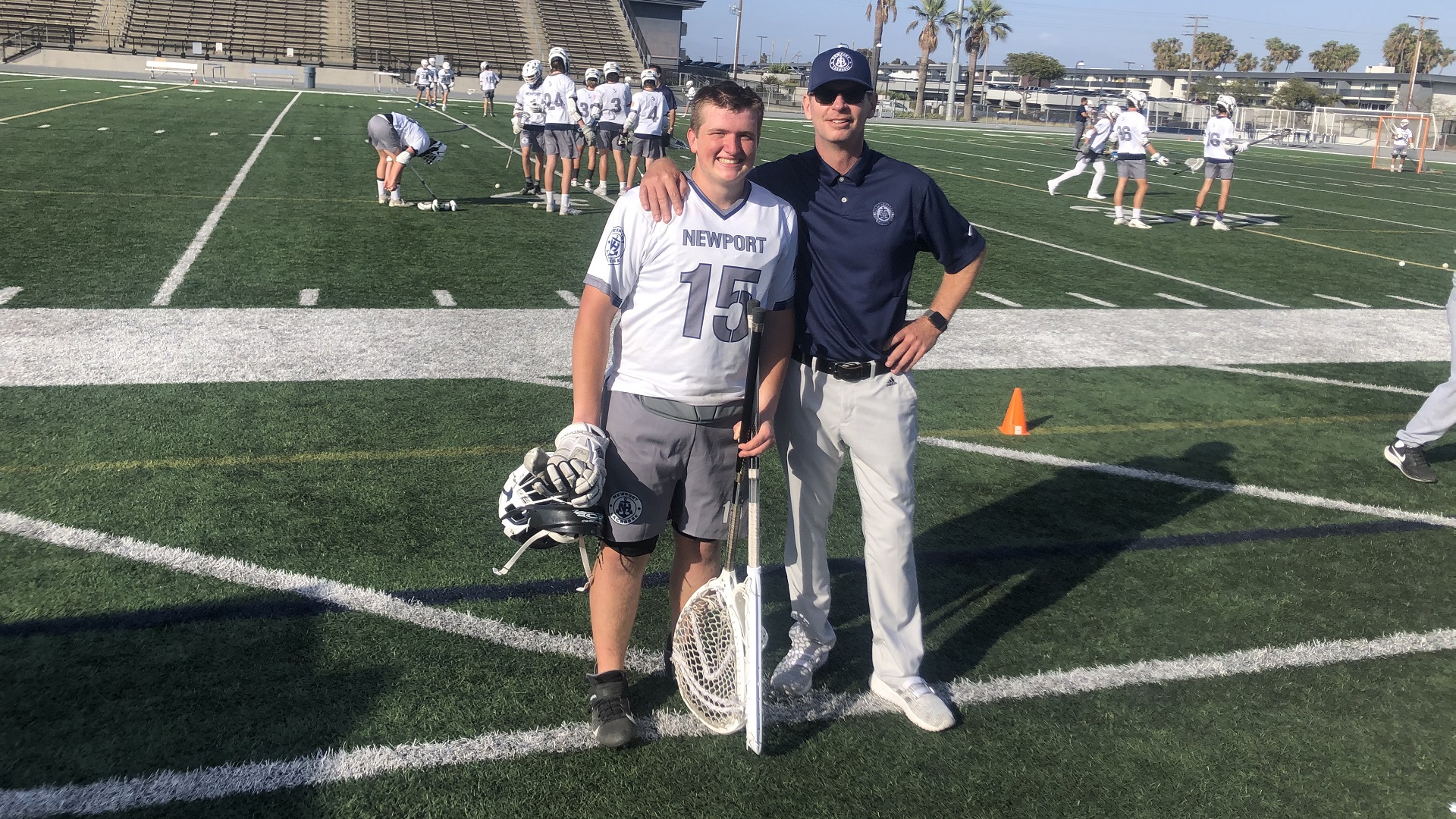 The Newport Harbor boys lacrosse team ended its regular season on a positive note, as it defeated San Clemente 7-6 on Saturday at Newport Harbor High School.

Luke Barnes led the Sailors with four goals while Charlie Durante, Will Patterson and Logan Atkins each had one goal. Jerome Snyder (pictured left) made seven saves.

“Settling our defense down and pushing the ball up field. That’s exactly what needed to do today and we did it very well,” Sailors coach David Todd said.

After Newport Harbor scored the first goal courtesy of Durante, the Tritons answered with goals from Dante DeCollibus and Jack Rogers, putting them up 2-1 at the 2:27 mark of the opening quarter. A minute and 10 seconds later, Barnes received a well-placed pass from Atkins and scored, tying the game at 2-2.

The second quarter saw both teams struggling offensively, as passes were becoming errant and the defenses were stepping up. Newport Harbor’s offense eventually broke through, as Patterson scored off of a pass from Barnes and 23 seconds later, Atkins got into the scorebook, making the eventual halftime score 4-2.

The third quarter was a complete flip flop for both teams, as this time San Clemente’s offense broke through, starting with Aidan Kaffi scoring at the at the 8:17 mark. Two minutes later, the Tritons had two opportunities to tie the game with two very good shot attempts, but both were saved by Snyder.

“When that [the back-to-back saves] was happening, we were all freaking out a little bit, but we all have confidence in Jerome too, and we all love it when he does those massive saves,” Todd said about Snyder.

San Clemente eventually knotted the game at 4-4 after DeCollibus found Kyle Dorsey wide open for the go-ahead goal. Just like the second quarter, both team’s defenses stepped up.

After Barnes broke the 4-4 tie 90 seconds into the final frame and gave the Sailors the lead at 5-4, Kaffi answered 21 seconds after for the Tritons, tying the game at 5-5. After that goal, however, San Clemente was unable to score for over nine minutes.

During that span, Barnes found the back of the net at the 8:49 mark, as Newport Harbor led 6-5. He followed that up by scoring his third goal of the quarter and fourth on the day, as he spun out of control, took a shot while he lost his balance and scored, putting his team up 7-5 with two minutes left.

The Tritons didn’t fold, as Davis Grace scored with 57 seconds remaining, making the score 7-6. They also got one more chance at am opportunity to score and force overtime, but the Sailors’ defense knocked the ball out of the sticks of the offense and sealed the victory.

“It’s great. We’re carrying so much momentum into the playoffs,” Snyder said.

Jake Perlow made six saves for San Clemente. Tritons coach Brendan Finnerty was proud of the way his team brought pressure in their final game of the regular season.

“To be able to have that pressure toward the end to get us ready for a playoff game where at the end of day, it’s going to be win or go home, was good experience,” Finnerty said.