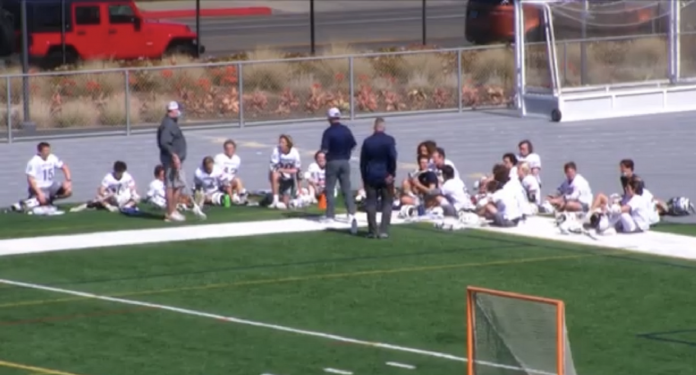 “Right before the game, I told the boys that it’s been 368 days since we played, ‘don’t make me cry, let’s get a win,'” Todd said. “However, after the game, when we all got together, I looked at them, I got teary eyed and I was very proud of my boys pulling off a victory and giving me my very first high school head coach victory at home.”

The Sailors opened a 5-0 lead after the first quarter and never trailed. Jensen’s goal expanded the Sailors lead to 6-0 before three straight goals from the Patriots cut the lead in half.

Eventually, the Sailors led 7-3 at halftime thanks to Durante’s goal.

The third quarter saw Beckman score three out of the first four goals of the quarter, cutting the lead down to 8-6. It seemed as if Newport Harbor regained control of the game scoring two straight goal to go up 10-6, but the Patriots ended the quarter with two straight goals, cutting making the score 10-8.

“Defensively, we have a young unit. The reason why some of the goals were let in were different defensive adjustments just to try something new,” Todd said, adding that he has confidence in defensive coordinator Tom McHahill.

The Sailors’ defense clamped down in the final frame, keeping Beckman off the scoreboard while their offense converted stops into goals. The quarter was highlighted by Barnes’ behind the back goal, which put the icing Todd’s first victory as Newport Harbor’s head coach and first victory as a high school head coach in general.

The Sailors (1-0) return to action on Wednesday when they travel to take on Mater Dei at 5:30 p.m. Todd was complimentary of the great job coach Johnny Rodriguez has done with the Monarchs, who beat Tesoro 14-6.

“My philosophy this year, I don’t care who we play, we practice as if we’re going into a championship game,” Todd said. “No one knows anything about any team, we have no film on anyone, so you’re going to games kind of blind.”

The Patriots (0-1) got two goals apiece from Dean Connolly and Tyler Hillmar while Aidan Gaffney, Max Texter, Jack Dobbins and Brenden Harley each had one goal. Beckman returns to action Wednesday when they play at Edison at 4 p.m.