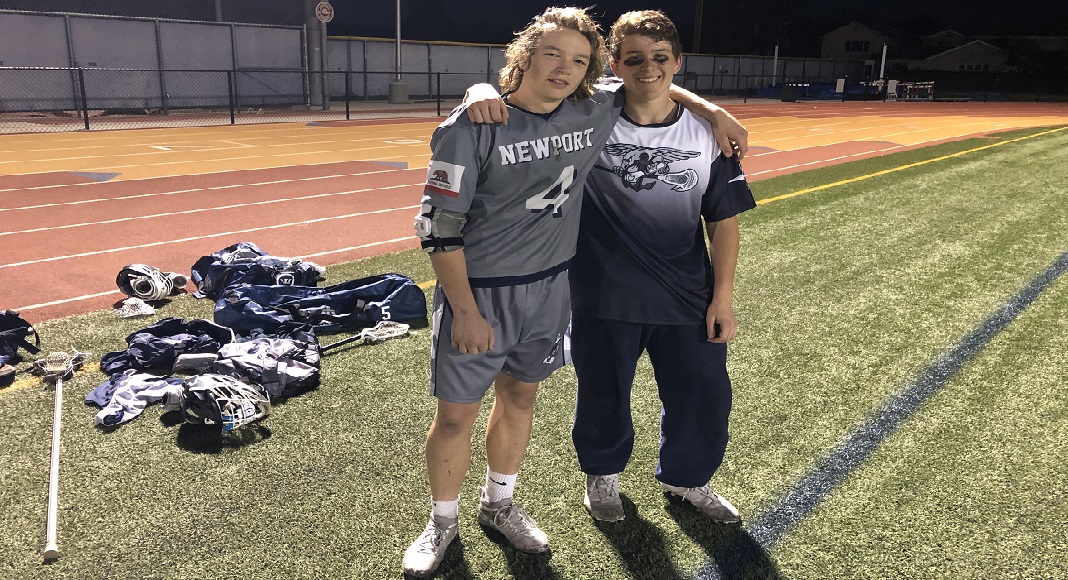 The Newport Harbor boys lacrosse team clinched the Sunset League title and an automatic bid to the playoffs by beating Los Alamitos 12-9 on Friday at Los Alamitos High School. The league title is the second straight for the Sailors, who have won 18 straight league games dating back to 2017.

The Sailors started the game out strong, scoring the game’s first three goals and keeping the Griffins off the scoreboard  until the 2:06 mark of the mark. The Sailors added an additional goal from Jackson Sawall, which bounced high and found its way into the net, giving the Sailors a 4-1 lead.

The Sailors’ lead grew to 6-1 early in the second quarter, but like most Sunset League games, that lead was not safe. Sparked by a pressure defense that started to create turnovers and extra man opportunities, the Griffins rattled off three straight goals, and went into halftime only down 6-4.

“We started playing impatient, we started getting too excited and we had that lead and everyone just thought it was going to be easy. Los Al came back with great effort, great vigor and it was impressive to see,” Sailors coach Mark Todd said.

The third quarter saw Goltz start pouring it on for the Sailors.  Goltz scored the first three goals of the second half and later added a fourth give the Sailors an 11-7 after three quarters. Although, the quarter did not go Los Al’s way, Ed Shean‘s buzzer beater gave the Griffins some momentum heading into the final 12 minutes.

The Sailors pushed their lead up to 12-7 in the fourth quarter until the Griffins scored two straight and attempted to make one last push. But the Griffins were unable to add anymore goals, as the Sailors eventually chewed up most of the clock and stormed the field having knocked off another rival of theirs.

The Sailors (9-6, 6-0) will have next week off due to spring break, but will be back at home on Tuesday April 16 against St.Francis at 7 p.m. While the Sailors are Sunset League champs, Todd says his team can still improve.

“We’re far from the best team in the county, but we’re trying to catch up. I told them [the Sailors] to get their runs in, get their wallball in and get rested [over spring break]. They just had the two toughest games of the season,” Todd said.

Los Alamitos, which celebrated its senior night, was led by Shean and Drew Anderson, who each had three goals while James Hightower, Nick Butao and Thomas Dentzer had one goal apiece. Guido Cuccia made nine saves.

“I tip my hat to Newport Harbor for coming out fired up for four quarters and getting it done,” Griffins coach Tim Fox said.