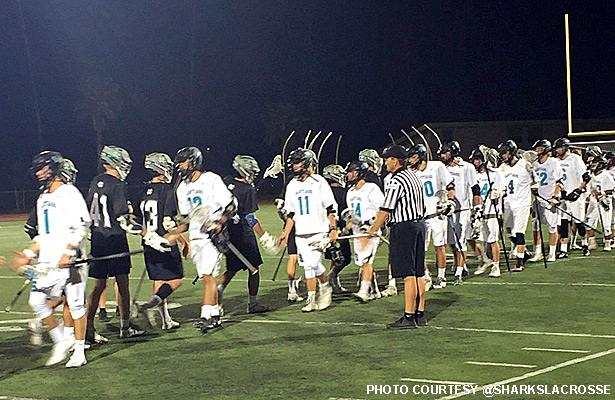 First-year CIF team Corona Santiago announced its presence with authority Monday, taking a 5-4 halftime lead over Mira Costa, then stretching it to 7-4 entering the fourth quarter and holding on to beat the Mustangs, 8-6. Mira Costa was ranked No. 6 in the US Lacrosse/MaxLaxLA preseason coaches poll.

But the real story of the game might be on the defensive side for Santiago, where sophomore goalie Logan Yost came up with 11 saves in holding the Mustangs’ offense in check. Mira Costa averaged 10 goals per game a season ago.

Sophomore middle Ben Hamilton and junior defender Bryce Parr did their part to keep the ball away from Costa’s offense, with Hamilton winning 10 of 18 face-offs and Parr coming up with four ground balls.

The Sharks (2-0) opened their inaugural CIF campaign with an 18-0 win over Damien on Saturday. Last season, playing as a club team in the Pacific Lacrosse League, Santiago went 16-2 and reached the club lacrosse state championship game, losing to South Valley of San Jose.

As a Southern Section CIF program, Santiago will compete in the Orange County division of US Lacrosse.