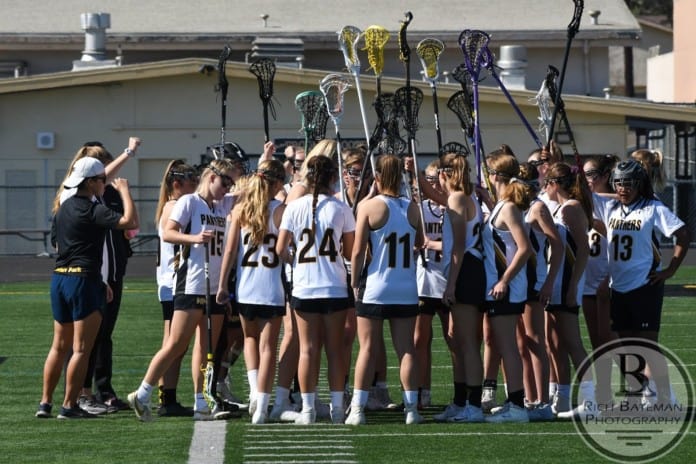 It was Michelle Yarger’s second year as head coach for the Newbury Park girls lacrosse team, but it was her first time assembling the non-league schedule. She wanted to turn up the difficulty.

She reached out to teams from Orange County and South Bay and had mixed results.

“I emailed some of them and they just didn’t know us yet,” Yarger said. “Rightfully so.”

But after sprinting to a 6-0 start to the season and a No. 3 ranking in the CIF-Southern Section Division 1 polls, the Panthers now have a reputation.

“I told my girls before St. Margaret’s, this is the last time you’ll be an underdog,” Yarger said.

With not enough players to field a varsity and JV team, Yarger opted to have one big varsity team. The veteran players embraced the competition and the new players followed. The scoring was balanced between players of different ages.

Junior Emma Ing (Oregon) led the team with 34 goals and senior Erin Duffy (UC Davis), followed with 26 goals. Lindsay O’Toole, a freshman, was third on the team with 15 goals.

“The upperclassmen poured a lot of love and support into the younger girls,” said Ing. “The upperclassmen, we were clicking ad the underclassmen were looking up to us and think we helped them and this season compared to many before we came together to play as a team.”

At the helm was Yarger, who hadn’t been with the team for two full seasons yet but had coached a handful of players in club lacrosse.

A two-hour commute to Newbury Park High School for practices and games never quelled Yarger’s energy. The coach has one volume while shouting instructions from the sidelines, but has a strong connection with her team.

“She can be very intense but she truly expects the best from us,” said sophomore goalkeeper Daniella Guyette. “It’s a coaching style I always liked to really get our heads out of the ground when we’re in our own heads and gets us to refocus on the game that’s on hand.”

After graduating from and playing college lacrosse for the College of Mount St. Vincent in Manhattan, Yarger moved to California in 2008 to work for a sports agency.

By sheer chance, she began coaching lacrosse and eventually took a job with the Los Angeles Aces program. Parents encouraged her to apply for the Newbury Park coaching job, a job she is not passionate about.

“I live in Los Angeles, so I commute two hours each way,” Yarger said. “But I had such a connection and I felt a loyalty to those players that they deserve to be coached at the highest level because they put in so much work.”

Although the season was shortened because of concerns over COVID-19, the Panthers have still been in touch with each other through weekly Zoom meetups and are eager for next season to start.

“I think we’re just getting started,” Ing said. “Looking back at the six games we played and how well we played, think next season is going to be amazing for us and we’re really going to succeed.”