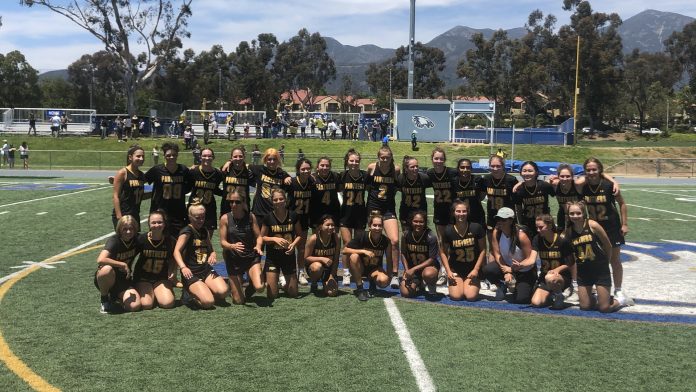 The Panthers (15-1) advance to the finals where they will take on Foothill on Wednesday at Tustin High School with a time to be determined. The Knights defeated Redondo Union 20-8 in the other semifinal.

Cassie Huber (No.21) led Newbury Park with four goals while Emma Ing (No.15) and Micah Shin (No.35) each had three goals. Penelope Reille, Sophia Laubner, Lindsay O’Toole and Reagan Laubner each scored one goal for the Panthers, who got seven saves from Danielle Guyette.

“I think all of the energy we brought to the field was amazing and when they [Santa Margarita] started to get close, I told my team, ‘keep the composure, keep the energy high, and we’ll play our game,’ so just playing as a whole team really got our victory today,” Ing said.

After the Panthers scored the first two goals courtesy of Ing and Huber, the Eagles got on the board with a goal from Audrey Crafts and followed that up with back-to-back goals form Molly Jacobson, giving them their only lead at 3-2 at the 17:27 mark. After that sequence of goals, the Panthers responded with four straight goals to put themselves up 6-3 at the 8:23 mark.

The Panthers started the second half by scoring the first three goals, as they took a 10-6 lead at the 21:52 mark. One thing that was starting to click for them was winning the draw controls as they held Santa Margarita to only one win on the draw control.

The Eagles didn’t get their first goal of the second half until the 12:43 mark where Jacobson scored off of a free position shot, but that goal marked their first goal in over in almost 15 minutes, dating back to the first half. They eventually experienced another goal drought as their next goal didn’t come until for another 11 minutes and 20 seconds.

During that span, Newbury Park continued to win draw controls, which turned into four straight goals. Sanders notched her hat trick for the Eagles with 83 seconds remaining, but the game had been decided already.

Jacobson led Santa Margarita with four goals while goalie Brogan Webster made 10 saves. Despite the loss, the Eagles, the co-league champions form the Trinity League, were happy with how their turned out and after the game, they celebrated Webster’s birthday.

“Our season was phenomenal, we lost three games – Mater Dei, Foothill and Newbury Park. We graduate three seniors, so [most of] my entire team is coming back ready for revenge and they’re going to want it next year and I’m proud of them for that and I think they’re a close tight-knit team,” Eagles coach Katie Jaisen (McHugh) said.

The Panthers, the Marmonte League champion, now turn their attention to the Division 1 final against Foothill. The two teams have faced one another already with the Knights winning 19-8 on April 24, being the only loss of the season.

“I think all of their starters and their bench can play lacrosse, so for them it would take a real team effort. We’re just happy to be here,” Yarger said.