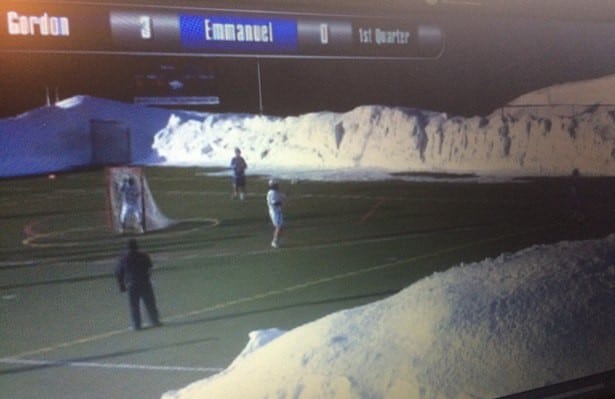 Former Foothill High School Knight  Owenn Geis, now a freshman at Gordon College in Wenham, MA showed the Boston fans some Lakers-like Showtime on Saturday as the rangy LSM led fast breaks to score the first collegiate points of his young career.  Geis had a goal and an assist, both off of fast break opportunities led by Geis, in the Fighting Scots’ 10-6 win over UMass Dartmouth on Saturday.  Geiss has started all three games for Gordon (1-2) and has 14 groundballs and 8 caused turnovers in addition to his two points.

University of Albany freshman Stone Sims (San Clemente High School) picked up 3 groundballs and was credited with a clear in the Danes’ 16-9 loss to Cornell on Saturday.  Sims has appeared in both games this season for the 1-1 Danes.

Boston University freshman Hayden Ruiz (Santa Margarita Catholic High School) continues to find the back of the net.  He scored in the Terriers’ 7-4 loss to Providence College on Wednesday and their 15-7 win over the University of Vermont on Saturday.  Ruiz has appeared in all five games for the 3-2 Terriers, and has six goals on the season

Hofstra freshman Brenden Lynch  (JSerra Catholic High School) continues to get minutes at defensive midfield for the Pride. Lynch has played in all four games for the 1-3 Pride.

Yale junior Michael Keasey (Corona del Mar High School) had an assist in the Bulldogs’ 16-9 win over Bryant University.  Keasey has 4 goals, 3 assists, and 4 groundballs while seeing action in all three games for the 3-0 Bulldogs.

Keasey’s high school teammate, Holy Cross junior Michael Ortlieb (CdM) recorded 11 saves for the Crusaders in their 7-6 loss to Navy. Ortlieb has started all three games for the 1-2 Crusaders and has a 0.569 save percentage.

Ortleib has made several strong saves already in the fourth to hold off Navy. 11:40 remaining in the contest

Freshmen Hunter Burgett (Great Oak High School) and Jeff Kohlschmidt (Temecula Valley High School) are expanding the Inland Empire’s sphere of influence to North Carolina while playing for the first year Division 2 program at North Greenville University.  Burgett has scored one goal while playing in all three games for the Crusaders.  Kohlschmidt has started at defense in all three games the Crusaders have played this season.

Senior captain Knute Kraus (Tesoro High School) picked up 4 groundballs as his No. 7 Salisbury Gulls fell to Gettysburg 12-6.  Krauss has started all four games for the Gulls.

Sophomore Chase Williams (St. Margaret’s Episcopal School) continues to have the hot hand for Haverford.  He recorded his second multi-goal game in as many tries this season for his fifth and sixth goals of the year in an 11-8 loss to Eastern University.