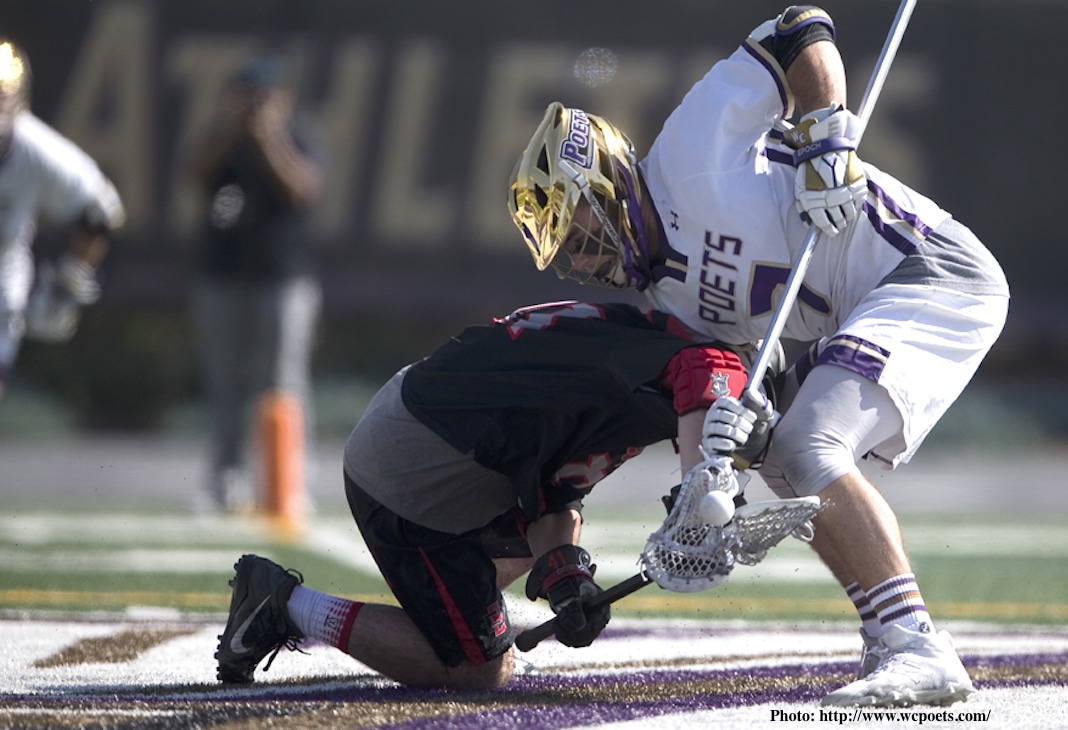 Holy Cross 10, Harvard 9: Kevin Kodzis (Foothill ’16) led Holy Cross to their first victory over Harvard in 34 years with two goals and two assists. Kodzis scored a go-ahead goal to give the Crusaders a 9-8 lead with 3:47 left in regulation and later fed Justin Lynskey who buried the game-winner 1:28 into double OT. Kodzis’ former West Coast Starz teammate Beau Botkiss (Torrey Pines ’16) started at defense for Harvard. Kodzis is no. 20 in the tweet below.

Boston University 10, Dartmouth 3.  Hayden Ruiz (Santa Margarita ’14 had) a goal and two assists for the Terriers.

Great start to this one as Haydo rips home a goal on our opening possession! pic.twitter.com/SGJXF3CnrO

Bryant 15, Hartford 10: Cam Ziegler (La Costa Canyon, ’14) had five points (4g, 1a) for Bryant. Ziegler now has 15 points this season. “Two guys that were key were two of our captains in Tom Kennedy and Cam Ziegler. They were huge for us down the stretch – one in the midfield and one on the attack. They made some terrific plays when we needed them,” said head coach Paul Pressler

Mt. St. Mary’s 16, UMBC 7: Jason Brewster (Valley Center ’15) started at defense for the Retrievers and was credited with two groundballs and a caused turnover. Justin Barragan (Great Oak ’17) got in some time at defense and picked up a groundball.

Maryland 13, Penn 6:  Anthony Demaio (Coronado ’16) scored a goal for the Terps. Don’t miss a chance to see Demaio and the Terps live when they play North Carolina in the Pacific Coast Shootout on March 24 in Costa Mesa.

Denver 17, Cleveland State 8: Nate Marano (Foothill ’14)had a goal and an assist for Denver.   Ryan Harnisch (St. Margaret’s ’14) was 2/3 on faceoffs and recovered a groundball.

Arizona State 18, Manhattan 8: Kylie Kroeger (Mission Bay ’17) had a goal and an assist for the Sun Devils.

Southwestern 11, Whittier 10: Zac Asbury (Thousand Oaks’ 17) scored a goal and assisted on two others, and Jordan Riggs (San Clemente ’13) had a groundball and a caused turnover for the Pirates.  Kevin O’Donnell (Pacific Ridge, ’14) was 9/10 on faceoffs for Whittier with seven groundballs.  San Clemente’s Ryan Crawford (1g, 3gb) and Grossmont’s Cooper Champagne (1g, 5gb) also performed well for the Poets.

Carthage 19, Hope 4: Luke Seydel Westview (’14) had a goal and a groundball for Carthage.