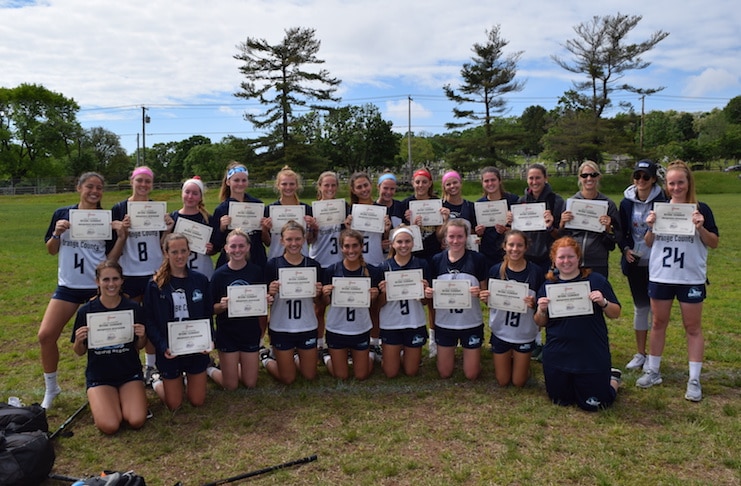 The Orange County National Tournament Team captured first place in its division for the first time ever this past weekend.

Coached by Foothill head coach Kate Hick and Tesoro head coach Lauren Ciccomascolo,  the OC defeated the team from New Hampshire and Vermont 9-7 on Sunday to clinch the Iroquois Division title at the Women’s National Tournament. The OC reached the championship game by defeating Connecticut-3 17-4, Gulf Coast 15-4, and Maine 13-9 in pool play on Sunday.  No other team from the OC had ever gone undefeated.

“I think the main reason for our success, as obvious as it may sound, is that the kids are getting better,” Hick said via email.  “They are better because coaching has improved in the county, more kids are playing club lacrosse, and these kids are playing with more confidence.  After going 4-1 last year, and this year going undefeated, I can see that the expectation of this tournament is changing.  No longer are these kids flying back east to get destroyed by teams, but to go out there and leave their mark.  With that mentality, I believe we’ll continue to see success.”

The Orange County Chapter of US Lacrosse held a tryout in March for the team and cast a wide net to select the best players.  A total of 24 girls’ lacrosse players (including two alternates) from 12 Orange County and Riverside County high schools were selected for the team.

Quinnlyn Mason, a rising senior at Aliso Niguel and a three-time member of the National Tournament Team credited the team’s success to her coaches and the natural chemistry that bonded the players.

“Coach Kate & Coach Cicco are both amazing & funny coaches who can really relate to us as players,” Mason said by email. They motivate us to work hard and bring out the best in us. Although we (the players) all compete against each other during the season a lot of us have played together on club/tournament teams in the past. Even though I don’t go to school with any of these girls, they are some of my best friends. I feel like we all respect each other and share a love of this sport which definitely helped us gel on and off the field.”

In all, more than 1,200 players on 64 regional all-star teams representing 27 states are competing in eight divisions at the Women’s National Tournament.  Thus some of the top players from around the country compete at this event every year, allowing those players who want to play at the next level to get a preview of what awaits them in college.

“For those wanting to play at the next level, it allows them to be seen by college coaches, which obviously can open some exciting doors, but more importantly, I think it’s important they compare themselves to other girls around the nation,”  Hick said.

“Our county can be a small place sometimes that I think these kids don’t know how good they are.  When they play these games against teams from back east, and are successful, I think the next level seems more attainable,” Hick continued.  I love being the “underdogs” and then seeing college coaches come by to watch these kids, who maybe weren’t on their radar.  Lastly, this experience is so great because we also have the opportunity to see the NCAA final four and championship game.  Seeing the game in person like that is nothing short of intoxicating.  I love how these games inspire the kids to want to go home and work harder and get recruited so they can play at that level as well.”

“Lastly, this experience is so great because we also have the opportunity to see the NCAA final four and championship game.  Seeing the game in person like that is nothing short of intoxicating.  I love how these games inspire the kids to want to go home and work harder and get recruited so they can play at that level as well.”

And while the players and coaches play to win on game day, there is plenty of time for fun over the weekend too.

“My favorite off-field memories of this weekend were going to watch the NCAA Semi-Finals especially the Navy vs. Boston College game and my coaches goofing off with their T-Rex walk and Pikachu impersonation,” Mason related.

The success of the 2017 National Tournament Team showed that Southern California and Orange County, in particular, is closing the gap on the traditional lacrosse hotbeds. Hick expects that gap to get even smaller in the future.

“I still think we have a ways to go to catch up to the rest of the country because, unlike a lot of east coast teams, our girls are still starting lacrosse at a relatively later stage,” Hick surmised.  “Again, that is changing, so the earlier we get sticks in these kids’ hands, the smaller that gap is going to get with the rest of the country.  However, with that said, I do think this weekend, our girls showed a high level of ability and I know that had an impact.”

Here is the roster for the squad representing the Orange County Chapter of US Lacrosse: