Nailon Leaving a Legacy at Foothill 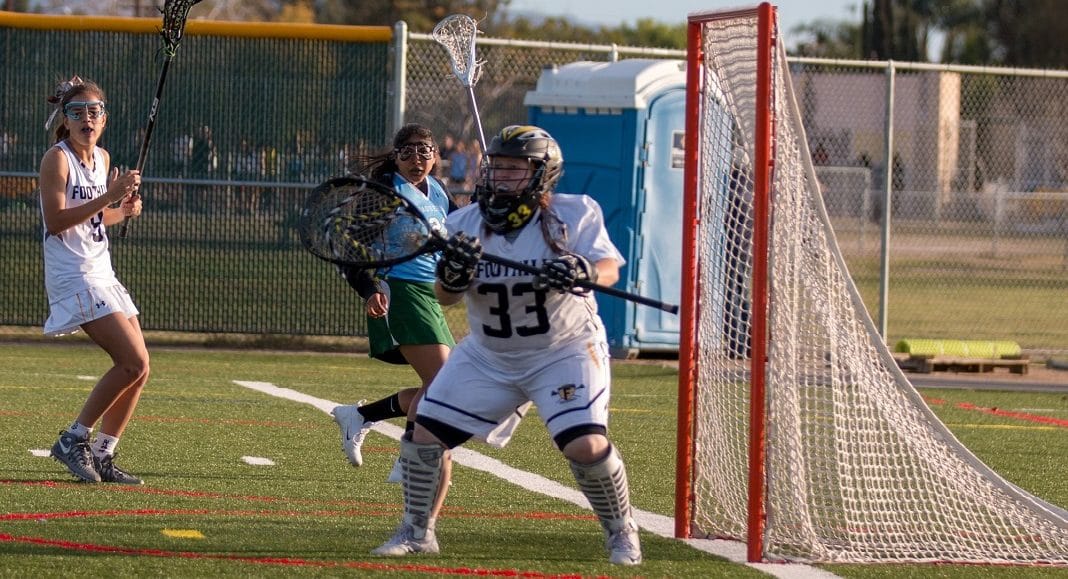 The goalie position can be the most strenuous job in lacrosse or any sport for that matter. As the last line of defense, goalies carry an unfair share of the burden. When a goal is scored, many fans tend to forget that goalie is the last line of defense not the only line of defense. When a goal is scored, fans often focus on the moment and simplify a complex situation, remembering who scored the goal and who “let” it in. They tend not to reflect back on the turnovers, lost draws, missed assignments or many other things that could have led up to the goal.

The position can be even more strenuous when high-performing predecessors raise expectations. One team that has always had good goalies year-in and year-out is Foothill’s girls lacrosse team. The Knights have had goalies ranging from Emily Kift, who graduated in 2013 and went on to play at the University of Maryland, and Hannah Upshaw, who helped lead the Knights to their first Southern Section Title in 2015 and is currently a sophomore goalie for USC.

After the departure of Upshaw ins 2016, the Knights turned to Becca Nailon to play between the pipes. Nailon has delivered, leading the Knights to the County Championship last season and a 10-2 record so far this season.

Nailon however, didn’t become one of the best goalies in Orange county overnight. Nobody is harder on Nailon than she is on herself, and perhaps the hardest lesson for her to learn was that good goalies have short memories. When a goal gets scored it is best to put in the past and get ready for the next shot.

Foothill coach Kate Hick remembers when Nailon came up to varsity and she remembers one word that always used to come out of her mouth, “sorry.”

“For me, it’s all about the word sorry. When she first started, every time someone scored on her, every time someone hit her or anything she did anything wrong, she would say sorry. And now she doesn’t say sorry anymore.,” Hick said. “Now she’s just a goalie. When she gets scored on, she gets the ball back and goes back and saves the next one. If she gets hit, she yells at her teammates, and I think that’s the biggest change for me.”

“Both goalies [Kift and Upshaw] that were before me went to [Division] 1 schools, so it was kind of scary. Kate [Hick] was really nice and everyone was really encouraging, so it was not too bad after that,” Nailon said.

Although her confidence has grown and her memory has gotten shorter, Nailon still expects a lot of herself. She just channels it differently.

“She’s really quiet honestly to us, but she comes up with big interceptions and big saves. She really turns things on. She’s very hard on herself, which I think is why she’s so good. She makes a difference,” Hick said.

Last year had some tough moments for Nailon and the Knights, as they dropped a 6-5 double overtime game to Tesoro. In addition, the Knights barely beat Santa Margarita 16-15 in the county quarterfinals last year.

“There’s always tough times like when you’re playing in a big game, but everyone else has been encouraging when you don’t have the best game. Usually when we win or lose games like that, you take responsibility. You lose as a team, you win as a team.” Nailon said.

How did Nailon respond after the close county quarterfinal game? By playing lights out in the semifinals, as she and the Knights clamped down on Newport Harbor, beating them by a score of 10-3. Nailon finished with eight saves that game.

Nailon first started playing lacrosse in the fourth grade, where Foothill’s boys lacrosse coach Jon Foxasked her to play and told her that the goalie position was open. According Nailon, her sister Krista, who also played for Foothill, helped get her into lacrosse.

Venessa Topete, one of Nailon’s teammates on defense, praised Becca on how her impact with the team has been amazing.

“She’s really been like the extra backbone on our team. We can always count on her to stop a goal if we miss a 1 v. 1 or anything like that. She’s really impacted this team immensely,” Topete said.

In addition to being coached by Hick in high school, Nailon was also coached by Hick when she made the 2017 Girls OC US Lacrosse National Team. Hick said Nailon came up really big in the nationals.

“We had our final game to see if we could win our bracket and she was a big difference for us,” Hick said adding that she always warms up with Nailon and talks with her before games.

The No.2 Knights have a big showdown with No.4 Santa Margarita tonight at Foothill at 7 p.m. Nailon knows that’s the team that almost upset Foothill in the playoffs last year, but expect she and her team to come prepared and not back down from the challenge.