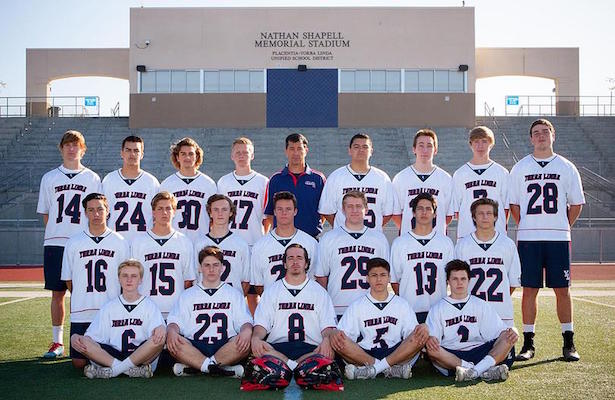 Yorba Linda and Esperanza gathered at Shapell Stadium on Friday night to renew one of the most intense rivalries in Orange County lacrosse.  The Aztecs, once the undisputed emperors of the Century League, relinquished that title to the Mustangs in 2013 and 2014. Armed with one of their strongest rosters in year, Esperanza looks like a legitimate threat to corral the Mustang and bring the league championship back to Anaheim.  So much more than bragging rights are at stake this year.

As expected Friday night’s game was played with much passion and both teams came out trying to establish an advantage from the opening whistle. Neither team was able to create separation from the other in the first half, which ended in a 5-5 tie. The third quarter was a different story as the Aztecs shutout the Mustangs to open up a 9-5 lead. In the fourth quarter, the see-saw teetered the other way, and this time it was the Mustangs who went into lock down mode. Five unanswered goals in the fourth quarter gave Yorba Linda the 10-9 victory and the upper hand in the Century League race. The rematch? April 24.

Jake Aho was nearly unstoppable for Esperanza, factoring in all but two of the Aztecs’ points with four goals and three assist.  AJ De Los Reyes (2g), Ian Hess (1g, 1a), Nick Helton (1g, 2a), and Jacob Newport (1g) also scored for the Aztecs.