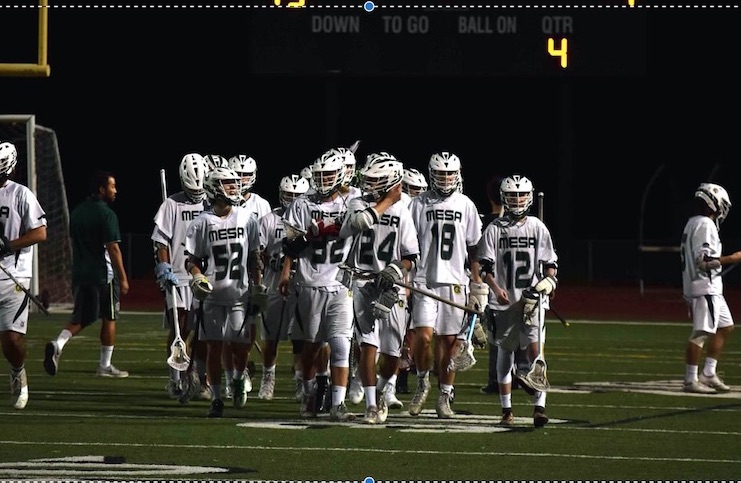 The Murrieta Mesa boys lacrosse team may not be done climbing the ladder.  The Rams were ranked no. 24 in the first coaches poll of the season.  A steady ascent powered by a 12-3 record and six-game winning season brought the Rams all the way to no. 14 this week.  The winning streak reached seven games and the record 13-3 when Murrieta Mesa beat Mira Costa (No. 13 in Los Angeles) 9-8 in overtime on Tuesday.  Derek D’Aquino led the Rams with five goals.

Overtime was only fitting in the back and forth game between the two evenly matched opponents.  Mira Costa led 3-1 after the first quarter, but then Mesa took over the middle quarters carrying a 7-4 lead going into the fourth quarter. But Mira Costa answered and tied the game with under two minutes left in regulation.

The Rams wasted no time in putting together a team effort to earn the W In OT.  Jacob Ray won the face off, Tristin Kinney collected the groundball, and passed back to Ray who led the fast break.  Ray fed Preston Jaurequi who passed to D’Aquino.  D’Aquino ripped the top right corner to win the game.