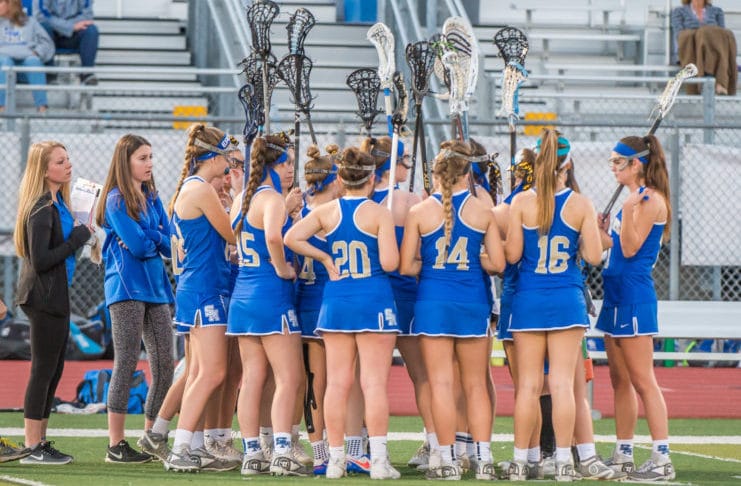 Katelyn Murphy scored 10 points on Tuesday night to lead Santa Margarita into the second round of the Southern Section Girls Lacrosse Championship for the third time in four-years. The high scoring Eagles defeated San Juan Hills 21-11, and will meet no. 2 Foothill on Thursday.

“Last night’s win over San Juan Hills was a huge lift for our team, said Santa Margarita coach Bob Mezeul by email. “San Juan is a strong athletic team with excellent draw control and scoring ability.  We knew going in that we would need to win the draw battle and own possession to have a chance at a win. This was perhaps the game differentiator as we did win 19 of 34 draws.”

And step up the Eagles did, putting 20-plus points on the board for the third time in their last six games. Murphy scored more hat tricks in a single game than most players score in a career.  Freshman Caylee Harrison notched the first hat trick of her high school career.  Sidney Ruiz and DiBernardo were among the other Eagles finding the back of the net.

Taylor Austin led the Stallions with five points (4g, 1a). Hannah Miller (1g, 1a) and Elena Guillen (1g) scored in the final games of their high school careers. Bridget Cain (2g, 1a) Lucy Hodge (2g) and Mandy Muhr (1g) completed the scoring for the Stallions.

Despite the loss to graduation of nearly half their current roster, San Juan Hills brings back a talented group next year. The core group of returning players should make the Stallions an early favorite to make the playoffs again next year.

Having made it to the second round for the third time in four years, they now turn their attention to advancing beyond the second round. Something they have not done since 2012. Standing in their way is No. 2 Foothill.

“Foothill will be another huge challenge for us. It’s no mistake they are the 2 seed – they have a fast transition offense that can score in a matter of seconds and have a tenacious defense.  We will need to bring our A game on Thursday night for certain.”