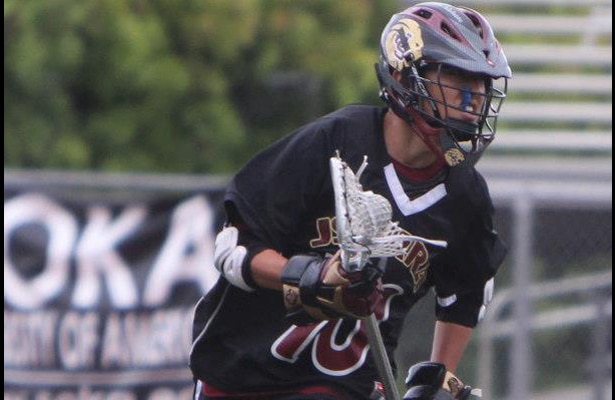 We recently posted an article on the six seniors from JSerra Catholic High School who committed on signing day to play NCAA lacrosse next year.  The article included a picture of the six student-athletes celebrating their accomplishments with coach Kyle Harrison.  Flanking Harrison in that picture, proudly sporting the colors of their chosen colleges, are James Yanes (Hofstra),  Jake Schleppy  (High Point),  Kennedy Solomon (UMBC), Nick Georgagi (Colorado Mesa),  Logan Olmsted (Colorado Mesa), and Yuta Murata (Colby College).  If you are a regular reader of MaxLaxOC.com you are probably quite familiar with Hofstra, High Point, UMBC and Colorado Mesa, and  appreciate what Yanes, Schleppy, Solomon, Georgagi, and Olmsted have accomplished by being selected to play for those schools.  You may not be so familiar with little Colby College (1,800 students) in Waterville, Maine, which means you may not fully appreciate the magnitude of  Yuta Murata’s accomplishment.

Kyle Harrison had this to say about Murata and his decision to play for Colby “I’ve always been impressed with Yuta‘s ability to focus on both his academics and athletics equally. He has made excelling in the classroom and on the lacrosse field a priority in his life from a very young age, and I couldn’t be more proud of him.”

Colby College is a highly selective liberal arts school.   The median SAT for the class of 2017 was 660/680/670.   Only top students need apply to this college that is ranked as the No. 15 liberal arts college in the country by U.S. News and World Report.  Their acceptance rate is less than 25% and over half the admitted students ranked in the top five percent of their high school class.

Murata will be playing for a college that is not only academically selective but also plays some very good lacrosse.  Colby is one of eleven highly selective liberal arts colleges and universities, including Tufts University, the reigning Division 3 National Champions, that make up the New England Small College Athletic Conference (NESCA). Sometimes called the “Little Ivies”, each of the eleven NESCAC schools are ranked in the top 50 of liberal arts school by US News and World Report, and most are in the Top 20.  The prestigious reputations of the NESCAC member schools, allows the conference to draw from a very selective pool of athletically and academically accomplished student-athletes.  Congratulations Yuta for making the cut!