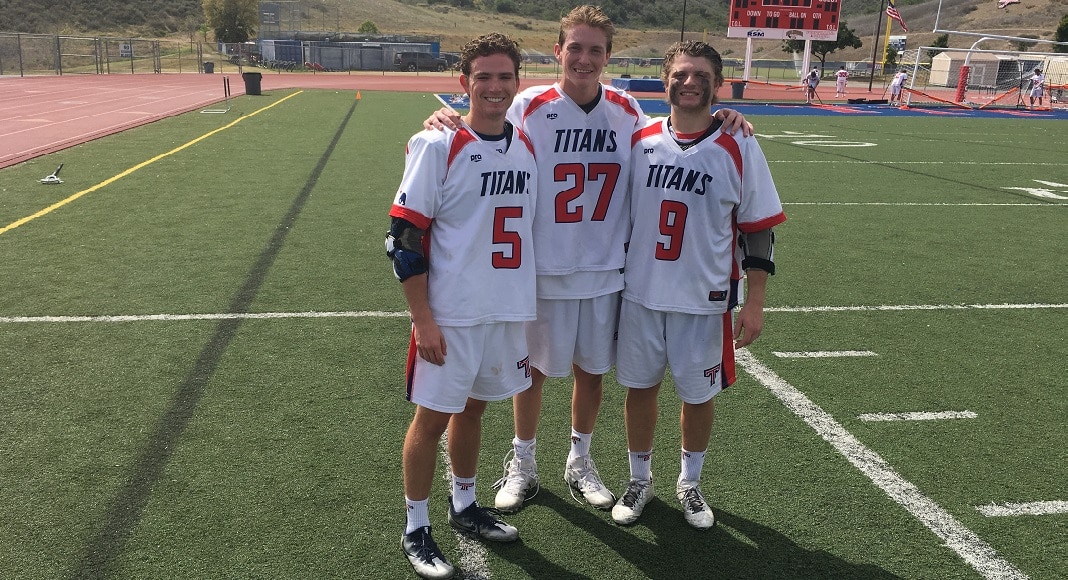 The No. 3 Tesoro boys lacrosse team remained undefeated and strengthened their grip on the no. 3 ranking with a strong 16-7 win over No. 6 Trabuco Hills on Saturday at Tesoro High School.  Jason Moreta led the Titans with six goals against the Titans’ former South Coast League Rivals.

“We knew we were facing a good team today, but we had to execute. We had a game plan that we wanted to stick to. We knew they were going to have a lot of pressure on us offensively, so we had to play good team defense, and our offense had to come and execute and we did that,” Titans assistant coach Reggie Scales, who was filling in for Brian Dunn, said.

A strong start benefited the Titans, as they scored the first four goals of the game before the offense stalled for a bit. The Mustangs answered back by cutting the lead in half before the end of the first quarter and by getting as close as 4-3 in the second quarter. But that was as close as the Mustangs would get.  The Titans started to heat up again before halftime and scored three straight goals to build a 7-4 by the interemission.  They then put the game out of reach in the second half.

In addition to his double hat trick, Moreta also had three assists. The Titans also got scoring contributions from Jonathan Gibson (3G, 5A), Carson Spooner (3G, 2A), Luke Molinari (2G), Taber Hankins (1G, 1A) and Quinn Lewis (1G). Defensively, Hunter Souza made 11 saves for the Titans.

For the Mustangs, Tyler Payne notched a hat trick while Jared Friesen scored twice. Holden Evans and Jake Wathen each found the back of the net once for Trabuco Hills, which got two saves from Chris DeMarco.

“We were on defense almost the whole game. I can’t blame the offense at all. They stepped up and played hard and made some great plays and great goals. I’m not going to be too hard on the kids. If we’re on defense the whole game, we’re not going to win any games. They [Tesoro] have a really good offense obviously. They’re the third ranked team, we’re the fifth ranked team,” Mustangs coach Eric Bassett said, also adding that not winning faceoffs and not getting groundballs is what hurt his team.

Trabuco Hills (11-4) closes out the regular season in a big way, as they play at Dana Hills on Tuesday at 5 p.m. and at San Clemente on Thursday at 5:30 p.m. Bassett knows how tough San Clemente is going to be the second time around, but if the Mustangs beat the Tritons and Dana Hills, they’ll be outright South Coast League champions.

“We need to forget about this. We’re still having a really good year. It’s just that sometimes matchups don’t work,” Bassett said also mentioning that beating San Clemente is important in order to win league and in terms of seeding.

For Tesoro (15-0), they close out the regular season with a Sea View League game on Monday at San Juan Hills at 5:30 p.m. Later in the week, the Titans play Murrieta Mesa at home on Saturday with a time to be determined. Scales said that the Titans are peaking as the playoffs approach.

“I think we’re prime heading into the playoffs. We’re putting everybody on notice to get some respect that we deserve. We’re just going to stay true to the plan. You ain’t seen nothing yet. This is only the beginning,” Scales said.