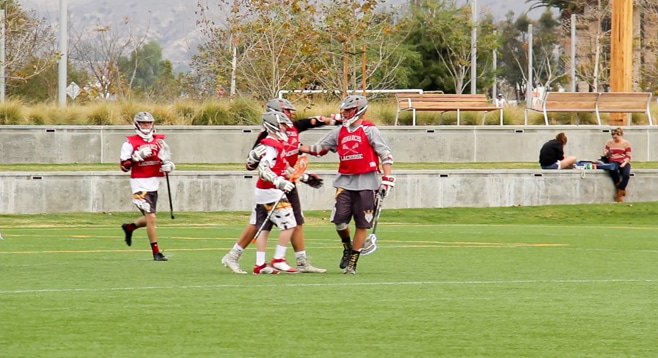 The Air Station Shootout, which concluded on Sunday, offered a nice sneak peek into what we might expect from the 2014 season. Perhaps the biggest story to emerge from the weekend was that three new head coaches showed that that they have their teams heading in the right direction. Paddy Chester and his Monarchs pulled off the biggest surprise of the weekend with an upset over a Victory club loaded with talent from St. Margaret’s Episcopal School. Adam Guy’s OC Rebels gave a hint that the Santa Margarita Catholic High School Eagles are ready to make amends for last year’s disappointing season as they showed continuous improvement throughout the weekend, and Brendan Finnerty’s Wild Horse Team showed that Beckman may be knocking on the Top 5 door this season as they hung tough in a one-goal loss to Foothill-based OC Crush.

This game was marked by some early game jitters as both teams had difficulty clearing and connecting on passes in the early going. As both teams settled down, they then started feel each out as they traded long possesions without any real scoring threats. Reigning Player of the Year Ryan Harnisch scored with a left hand rip from about 10 yards to start the scoring for Victory about midway through the first half. Nick Southron answered for the Monarchs a few minutes later, beating goalie Payton Fales to his left with a low to high sizzler. Southron then put the Monarchs up 2-1 just before half time on a tremendous hustle play when he picked up a ground ball in a scramble, crashed and spun his way through the defense, and finished on the crease. Victory came out strong after the half as Paddy Fallon connected with Sam Harnisch to tie the game. The Monarchs defense held Victory to just 1 goal for the rest of the game while Southron led the offense to three more goals and a hard fought 5-3 win.

Two hours after their surprising win over Victory, the Monarchs struggled unsuccessfully to overcome and emotional letdown. The Rebels came out aggressively and took advantage of a lethargic start by the Monarchs to jump out to an early 4-0 lead. Wes Schuler started the scoring with a high to low bounce shot. Nico Houser followed with a sweet low to low rip from 8 yards. Andrew Kofoed fed Jeff Palmer for the third goal, and some bruising defense by Eric Ruback caused a turnover that lead to a Kofoed goal assisted by Zach Taylor. Seven minutes into the game, the Rebels held a commanding 4-0 lead.

Defenseman Nick Baur tried to to breathe some life into the Monarchs when he cleanly picked off a Schuler pass and immediately hit an open Eric Parra at midfield with a perfect pass. Parra kept the fast break going by dishing off to Jack Southron, who walked into the crease unescorted and finished to make it a 4-1 game. The momentum switch was only temporary though as Logan”Doc” Dochterman quickly responded with a high to high rip, before another Rebels score closed the half at 6-1.

The Rebels continued their aggressive play in the second half as a Ruback take away and groundball led to another goal by Kofoed. Goals by Michael Senecal (two goals), Joseph Fice, and Hayden Ruiz closed out the scoring and sealed the 11-1 victory.

Wild Horse (Beckman) had a great showing this weekend, losing three games by one goal. All the one goal losses were to teams that will be making deep playoff runs this season: Harvard-Westlake (LA), Victory, and Crush. Unfortunately for Wild Horse, Crush proved why they were the team to beat during the Airstation Shootout by edging the squad from Beckman in the final seconds to seal an undefeated Shootout this weekend in Irvine.

Beckman came out with an aggressive style of play that paid off on the defensive end until the third possession where Foothill was able to beat a double team behind the cage with a feed an open Warren Case at the top of the box for the high to high rip. Alex Knox responded with a dip and dunk from X to even the score at 1-1. Matt Harris tallied another goal for Foothill before the end of the half off a well set up dodge down the right alley.

Nate Marano was up to his old tricks again and scored the first of his two goals just a minute into the second half. Nick White capitalized on a man up opportunity for Wild Horse and gave them the momentum to score another goal off the ensuing Foothill possession when goalie Matt Allen hit defenseman Tanner Culley to initiate a fast-break that Knox tied the game at 3-3. Marano and Case kept the see saw going by trading goals with Alex Malmlund and Alex Knox to keep the game even at 5 all. With 30 seconds to go, the Crush intercept an attempted clear by Allen, and the ball eventually found its way to Ryan Falbo who finished give Crush the W and Jon Fox a sigh of relief.

Nick Bauer – The rangy dual-sport athlete (football) looks like he will thrive in the Paddy Chester era at Mater Dei.  Bauer played with the right mixture of aggressiveness and discipline to lead a defense that held a a St. Margaret’s-centric Victory team to three goals.  He is very confident with the ball in his stick and his speed makes him a serious clearing threat.

Matt Allen – Played an exceptional game against Crush that was only tarnished by the late missed clear. Save after save kept Wild Horse in the game including a few doorstop saves that had the crowd going nuts. Look for Beckman to upset some really good teams this year if he can play like he did on Sunday and get the ball back to Alex Knox and the Beckman offense.

Eric Rubak – The young sophomore will team very nicely with senior Ravi Dhouni at close D. Rubak plays physical D and is not afraid clear out the crease. He also demonstrated some good wheels and clearing ability. Rubak may be ready for a breakout season.

Alec Simpson – We watched Simpson play on Saturday, and the El Dorado midfielder played some great midfield D and used his speed to be a serious clearing threat.

Payton Fales – The sophomore transfer from Huntington Beach High School made some great stops against the OC Rebels. He looked very confident carrying the ball on the 10 man clear, and showed some great footwork when he needed it.