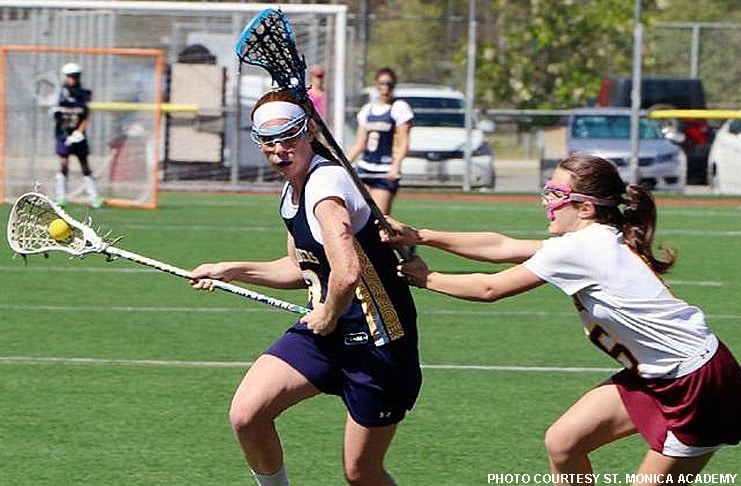 Molly Hagan, a Class of 2017 graduate of St. Monica Academy in La Crescenta, has earned a spot on the University of Notre Dame women’s lacrosse team as a walk-on following a recent tryout.

Hagan, a three-sport star at St. Monica, was one of three freshmen to try out and the only one to earn a spot on the team, becoming the first freshman field player to walk on to the Fighting Irish roster in head coach Christine Halfpenny‘s seven-year tenure.

St. Monica added lacrosse as a sport only last year, giving Hagan only one year of interscholastic competition. However, she has played lacrosse since seventh grade, first with the LA Wave and later with the LA Aces. She also was all-CIF in volleyball and basketball. In her senior year, Molly captained the volleyball and basketball teams to the playoffs and was the League MVP for both.

Hagan played midfield and attack at St. Monica but is listed as a defender on Notre Dame’s roster. An announcement posted on the St. Monica website noted that the Notre Dame “coaches told Molly that she was in the top 20 percent of the team for speed and overall fitness.”

“We’re completely thrilled,” Jim Hagan said. “She worked so hard on her fitness this past summer, but my wife and I were trying to be low key. We knew it was a long shot, and we did not want to get Molly’s hopes unrealistically high.”

Notre Dame, which went 11-8 overall last spring, losing to Cornell in the first round of the NCAA Tournament, announced a recruiting class of nine freshmen over the summer. Molly Hagan will be the 10th freshman on the 2018 Fighting Irish roster and the only player from California.