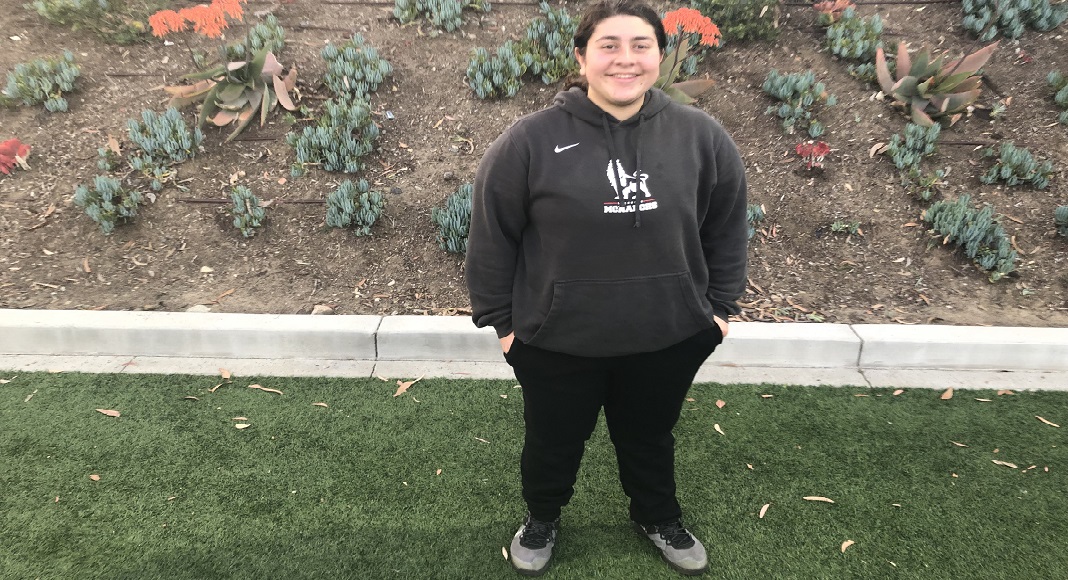 In a rematch of last year’s county championship game, the No. 2 Mater Dei girls lacrosse team edged No. 3 St.Margaret’s 12-11 on Tuesday at St. Margaret’s Episcopal School. Similar to this week’s coaches poll, the Monarchs edged out the Tartans in a near toss-up.

Mater Dei goalie Lily Molkara (pictured above) came up big for the Monarchs with five saves against the Tartans’ potent offense. Four of those came in the second half to make Mater Dei’s razor-thin 8-7 halftime lead hold up.

“Playing goalie is a really tough position, very mental position. You have to be ready to step up in very heated times, and Lily definitely did that for us today,” Monarchs coach Chloe Silance said.

Defense dominated the early part of the second half and the two teams went 7 minutes and 30 second without a goal until Audrey Larson scored the equalizer for the Tartans off of a free position goal.

After Mater Dei went up 9-8, the Tartans scored two more goals to grab a 10-9 lead and seemingly the momentum at the 15:53 mark. However, Molkara and the Monarchs’ defense went into lockdown mode and did not give up another point until  the final minute of the game.

“Our win came down to defense. our defense held us in, played patient, played together, worked together to shut down some really good motion offenses that St.Margaret’s had. Defense wins championships,” Silance said.

The Monarchs led 12-10 after Gia Danese turned good defense into a scoring opportunity by turning her interception into a goal. The Tartans didn’t score until there was less than a minute left, bringing the score to 12-11.

With 29.8 seconds left, the Tartans won the ensuing draw and scored the equalizer 12 seconds later. But Silance asked the referees for a stick check on the Tartans’ player who scored the last goal and eventually, the referees ruled the stick illegal and the goal was taken off. The Monarchs were then awarded possession and were able to run out the clock.

“It’s nice to have versatility, it’s nice to not be dependent on one player and it’s nice to see them [the Monarchs’ offense] together to put together a cohesive offense,” Silance said.

Tess Keiser led the Monarchs with three goals while Peyton Smith, Chloe Seybold and  Danese each had two goals apiece. Tallulah Rehader and Jamie Ko each scored once for the Monarchs.

“I thought it was a competitive game back-and-forth, but you got to tip my hat Peyton Smith. Her heart, her energy, she left it out on the field,” Rodriguez said.

Maddie Barkate led the Tartans with three goals while Campbell Case, Niki Miles and Jordan Miles each had two goals. Larson and Grace Karstetter each scored once for the Tartans, who got four saves from Olivia Young.

“It was awesome to see her coming out of the crease and making some doorstop saves. It’s really awesome to see that confidence developing in her,” Tartans coach Holly Reilly said of Young.

Next up for the Monarchs (6-2), a trip down to San Diego against one of San Diego’s best, Torrey Pines on Tuesday. The Tartans (4-3) look to snap their two-game losing streak, as they play at Torrey Pines on Thursday.