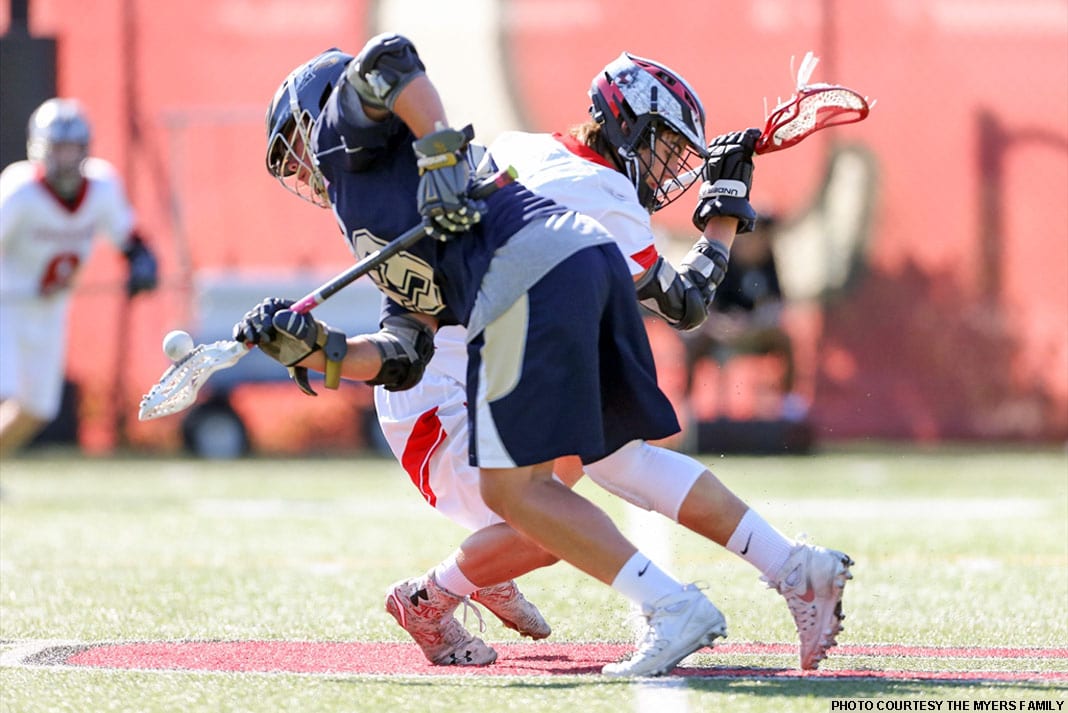 Mitch Myers, a Class of 2019 face-off midfielder from St. John Bosco, announced recently he has committed to play NCAA Division I lacrosse at Bryant University in Rhode Island.

Myers answered questions about his commitment via email, citing the atmosphere at Bryant on his visit Nov. 10 as a key factor in his decision.

“In addition to having a well respected business school,” Myers said, “on my visit there I noticed a strong brotherhood between all of the players. Everybody treated everybody with respect, no matter the seniority. Having Mike Pressler as my future coach was also a huge factor in choosing Bryant. Out of all the schools I visited, I believe Pressler was the most outstanding coach in terms of his well built resume and his player testimonies of his coaching.”

In October, Myers was rated the No. 77 Class of 2019 prospect in the nation by Recruiting Rundown. Last week, he justified that ranking by earning an all-star nod at the NXT Philly Showcase. Those honors came on the heels of an all-star selection at the prestigious Maverik Showtime event in July and a spot on the Under Armour “Uncommitted 2019” squad last June.

In the spring, Myers helped lead Bosco to an 8-8 record in the programs first season of CIF play, winning 96 percent of his face-offs.

“I am extremely proud of Mitch,” Bosco coach Chris Jewett said via email. “It’s great to see all his hard work in the classroom and on the field pay off. Bryant is getting a truly wonderful student athlete. I am also very excited to have him at St. John Bosco for two more seasons.”

While the last year has been filled with accolades and honors, Myers said it was his first trip to Maverik Showtime as a rising sophomore that made him realize he might have the opportunity to continue his career at the D-I level.

“My first year going to Showtime I was able to play against some very talented, nationally recognized players,” Myers said. “Before we started the games that the coaches watched, there was a practice session where all of the face-off guys met and worked together. Being super intimidated by some of the best players in the country, I went into the practice session expecting to lose almost every face-off I took. I felt I had a chance to go Division I when I realized I was able to hold my own facing off against high-level D-I commits.”

Myers, from Huntington Beach, has played for a number of club programs over the past few years, and he credited all of them with helping him reach this point.

“I believe all the coaches I’ve had over my lacrosse career have made this possible for me,” he said. “I am so grateful to one of my first lacrosse coaches, Brian Dunn, for being so patient with me in teaching me the fundamentals of the face-off game, in addition to people like Coach Tom Demaio, who gave me the opportunity to play in high level tournaments around the country for him and one of my current club teams, Team-12. My current coaches — Chris Jewett (current high school coach), Brendan Bowler, as well as Mike Ryder of 3d Colorado — were huge in helping me reach out to colleges. I cannot thank all of my coaches enough for helping me progress to this point in my lacrosse career.”