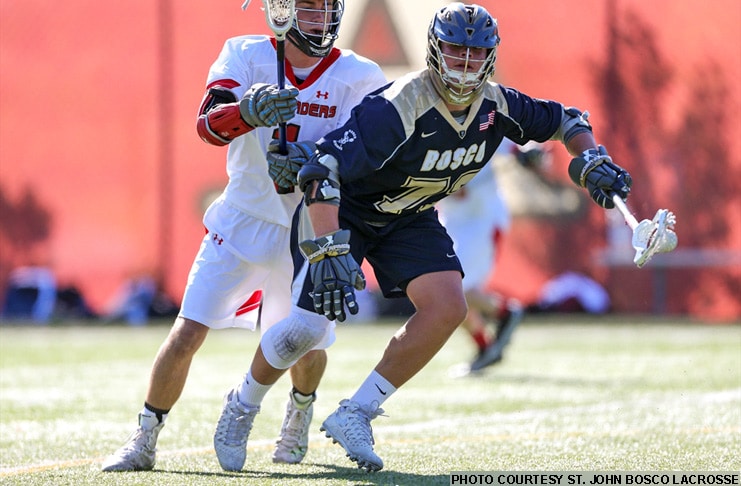 St. John Bosco is only 2-6 in its first season of CIF play, including two one-goal losses, but there is at least one bright spot for the Braves, one that should help coach Chris Jewett build his program to a competitive level fairly quickly.

That bright spot is sophomore face-off middie Mitch Myers, who is winning an astounding 94 percent of his draws this season.

“As a first-year CIF program, it has meant so much to have an elite face-off guy,” Jewett said. “I would not call him a FOGO [face-off, get off], because he stays on and plays O and D, man-up and man-down. He’s really a do-it-all mid/attackman for us.”

Unfortunately, the Braves haven’t been able to translate their possession advantage into many victories. Bosco averages 10 goals per game but surrenders 13. In a recent 13-9 loss to No. 13 Mira Costa, the 5-foot-10, 185-pound Myers won 23 of 24 face-offs, and the Braves led 6-2 in the early going. But they couldn’t sustain it for four quarters.

Still, winning possession at the dot as much as Myers does has been important in taking pressure off the Bosco defense and giving the offense opportunities to develop.

“We are an extremely young but talented team made up of freshman and sophomores,” Jewett said. “It gives our boys tremendous confidence to know that we basically will get the ball 94 percent of the time. You can see this young group gain energy and build camaraderie each time Mitch wins a face.”

Myers recognizes that, too, and says he embraces that as part of his job.

“Getting possession of the ball for my team is something I am constantly trying to perfect, every time, every game,” Myers said via email. “Doing this gives my teammates better potential to build up a lead in the game.”

Myers started playing lacrosse in fourth grade and originally played close defense, but he said he started facing off in seventh grade because his team didn’t have a face-off specialist, and he was tired of having every draw end up in his team’s defensive end instead of going the other way. He worked with coach Brian Dunn, who played at Corona del Mar and Chapman and is now head coach at Tesoro, and ended up falling in love with the face-off role.

Since then, Myers has gone on to play for Team 12 under Dunn and Tom DeMaio and 3d Colorado, as well as working privately with both Dunn and Brendan Fowler of The Faceoff Academy. Last November, he was named all-tournament at the IL Northeast Invitational, held at Brown University in Providence, R.I., and last summer he made the Class of 2019 all-star roster at Maverik Showtime.

“In my 10 years coaching out here, he’s one of the best I have been around and had the pleasure of coaching,” Jewett said, “and he’s only a sophomore. His face-off winning percentage is unheard of.”

His performance at Maverik Showtime and the IL Northeast certainly has him on the radar of college recruiters, and Myers said he has a big summer planned as he looks ahead to his junior year and beyond.

“I have a pretty great summer set up,” he said. “I will be playing in six showcases, mostly East Coast. The event I’m most looking forward to is Maverik Showtime. I was there last year, and it was easily one the the best lacrosse-related experiences of my life! Overall, I’m just really excited to spend another summer traveling the East Coast and playing against some of the best in the nation.”

Presumably, that will lead to an opportunity to play in college a few years from now.

“For sure I would love to play lacrosse in college,” Myers said. “What better way to honor the coaches that put the time in to help me get there? I think it’s a great way to get an education. I love lacrosse, but I will always pick a prestigious school with a great entreprenuership major over a lacrosse powerhouse. Education is my top priority.”

A scholar-athlete in all three of his previous semesters at St. John Bosco, Myers says he carries a 3.7 GPA.

“Mitch is not only a great player, but he’s also a fantastic person,” Jewett said. “He has wonderful energy and always brings a positive attitude to practice and games. He’s extremely coachable, has high lacrosse IQ and mentally is very tough under pressure. He’s a joy to be around and coach.”