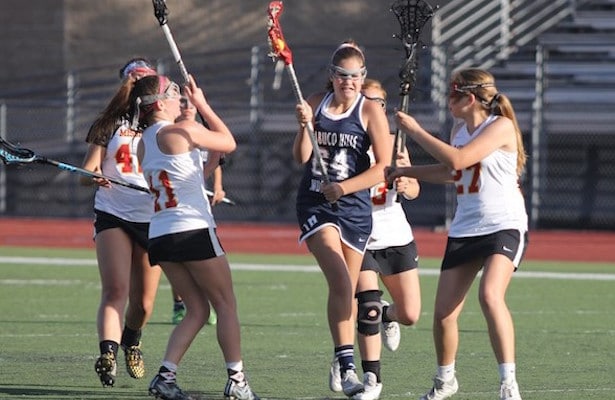 The Mission Viejo High School Diablos’ junior varsity girls’ lacrosse team took the field for the Sticks and Stones tournament this past weekend at Trabuco Hills High School. A successful 12-5 win against Glendale set the Diablos up to battle Birmingham in the semi-final. They came out victorious, winning by one goal in an overtime shootout. Unfortunately, the running tournament clock left the Diablos short on time in the second half of the championship against Trabuco Hills Mustangs, ending in a 3-4 loss.

Senior goalkeeper, Heather Dixson, played a huge role in the success for the Diablos in this tournament. With the key save in the overtime shootout that helped win the semi-final, Dixson led the team confidently in the final game hauling in 7 saves for her Diablos.

Junior midfielder, Isabella Grimm, impressed throughout all three games in the tournament, firing shots and scoring the winning semi-final goal. Her perseverance, attitude and skill won her a spot on the all-tournament team at the end of the day.

The Diablos fought hard in the championship ending the first half in a 1-1 tie. The Trabuco Hills Mustangs came back with 3 back-to-back goals the second half, leaving the Diablos to battle the clock for a comeback. They came up just one goal short, but played with strength and poise until the finish.

Congratulations to these Diablos on their second place tournament finish!