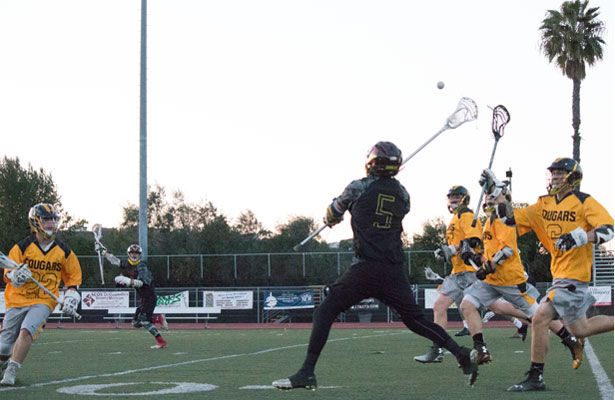 Like so many of the great crosstown rivalries, the Capistrano Valley High School Cougars and  Mission Viejo High School Diablos are friends and neighbors off the field, and hard-nosed rivals on the field.  And that has rarely been more evident than on Friday night when the the two teams showed their respect for one another by taking some time at halftime to celebrate 10 years of Capo lacrosse.  Scott Grubert who has coached at both high schools, and through his youth program has worked with players on both sidelines was honored as Capo’s first head coach.

While other parts of the country hunkered down wondering when the snow is going to melt, the Cougars and the Diablos faced off on a classic OC spring evening.    Head coaches Jim Gerbershagen of Capo and Hudson Parker of Mission Viejo, having done outstanding work on rebuilding their respective high school lacrosse programs, and it showed in the quality of play on Friday night.

Both teams came out aggressively, which resulted in some early scoring.  Evan Hunter got Mission Viejo on the board first with a hard lefty shot at 10:48.  It took Clay Eggeman only 30 seconds to tie the game with a running left handed bouncer.  The Diablos and the Cougars then traded another pair of goals.  A top shelf blast from the wing by Mission Viejo’s Connor Weissman at 8:10 put MV in the lead but Carter Bache tied the score soon after receiving a feed from senior captain Blake Berk.  In the last minute of the 1st quarter, Mission Viejo capitalized on one of many great saves by Alex Walker (18 saves), an outstanding clear by senior defenseman Teddy Finley and a strong finish by senior middie Noah Miyake to take a 3-­2 lead into the second quarter

The Diablos  took control of the game in the second half with Hunter completing his hat trick of the game and Weissman adding three  more, to finish with a game high five goals for the night. The second half also featured an awesome play by Senior defenseman Teddy Finley who was dominating on close defense and showed his stick handling skills with numerous full field solo clears. Capo took rip after rip at the Mission Viejo cage but senior goalie Alex Walker was ready for each attempt compiling 18 saves on the night.

Players of the Game