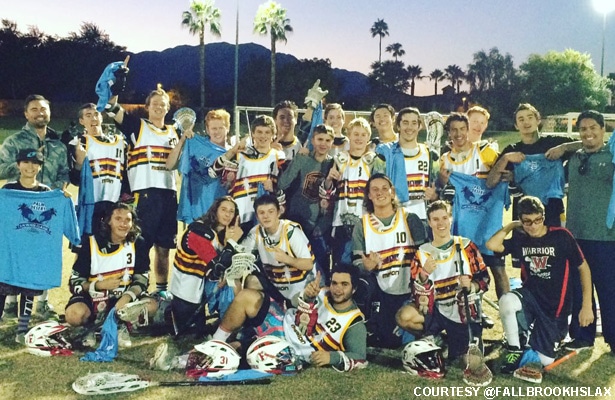 Players from Fallbrook and El Camino high schools teamed up last weekend to form the Mission Lax entry in the Palm Desert Lacrosse Classic, then went 6-0 to claim the U17 championship.

Coached by Donovan Marinez (El Camino) and Paul Morgan (Fallbrook), Mission Lax went 2-0 in on Friday, including a 7-6 win over Bunch Nation that El Camino sophomore Blake Amiatu clinched with a Braveheart victory.

“The team was led by El Camino middie Blake Amiatu and Fallbrook middie Tyler Jenkins,” coach Morgan said. “These two clicked the moment they stepped on the field, with Tyler drawing slides and finding Blake in skip lanes on almost all of our goals. Midfielder David Tran (El Camino) also stepped up all weekend.”

Mission continued its strong play Saturday, beating Tune Squad 3-2 and Angel City 12-0 to earn the No. 1 seed in the afternoon’s playoff bracket. A second win over Tune Squad, this time 6-0, put Mission in the title game, where they knocked off Bunch Nation 5-2.

In all, Mission recorded three shutouts and allowed two goals in two other games. Only Bunch Nation on Friday scored more than two against the Mission defense.

“Jake Smith (El Camino) led the defense,” Morgan said, “with Fallbrook goalie Wesley Wheeler making save after save in goal all weekend.”