Mira Costa Digs Out of Early Hole to Beat Bosco 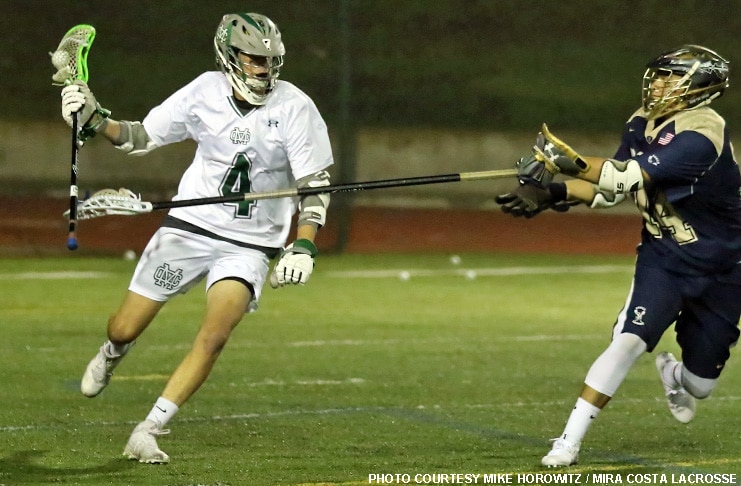 St. John Bosco burst out to a 4-0 lead and led No. 13 Mira Costa 6-2 after one quarter, but the Mustangs recovered from the early onslaught and went on to beat the visiting Braves 13-9.

Bosco (2-6), in its first year as a CIF program, benefitted greatly from the face-off dominance of sophomore Mitchell Myers, who won 23 of 24 at the dot (including 8 of 9 in the first period), according to the Mira Costa scorebook. Early on, that was enough to propel the Braves into the lead.

But the Mustangs (6-2) turned things around in the second quarter, getting two goals from senior Casey Bonner and one each from Zach Horowitz and Macallan Laver to tie the score 6-6 heading into halftime. Laver’s goal, assisted by Horowitz, came with only three seconds left in the second period.

The Braves briefly took a 7-6 lead to open the third period, but Costa rattled off three more to lead 9-7 heading to the fourth, then got two more early in the fourth to essentially put the game out of reach.

Bonner and Josh Maruyama each scored three goals for Costa, and Horowitz scored two and had five assists. Laver and JJ Packer also scored two goals, and Max Geoghegan had one. Goalie Grant Wozniak was credited with 10 saves for the Mustangs, nine of them after the first period.

Mira Costa plays at Brentwood on Friday, while St. John Bosco is off until next week.