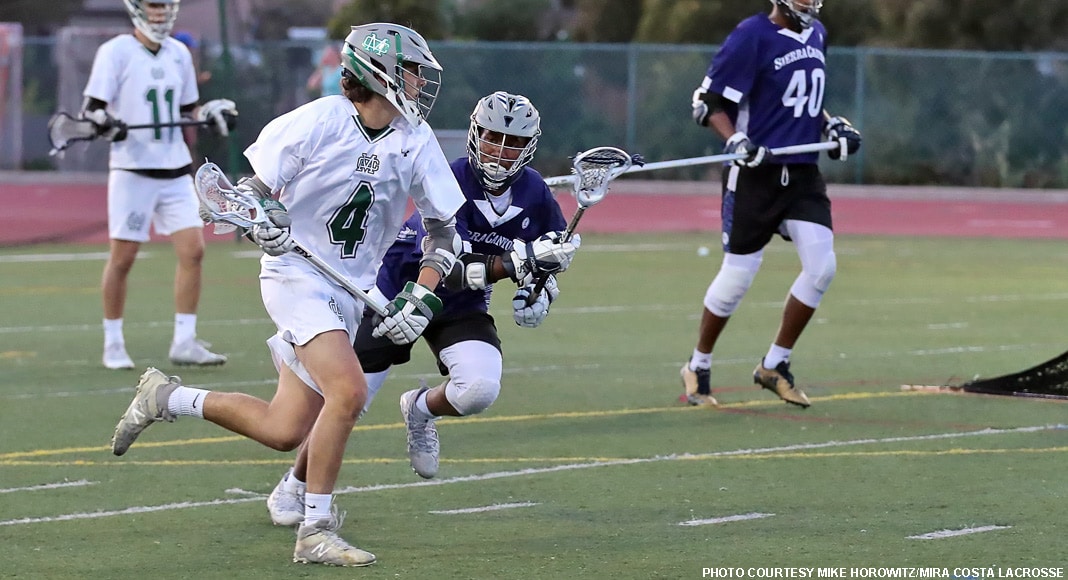 Mira Costa’ Zach Horowitz celebrated senior night in style Tuesday night, scoring three first-half goals to stake the No. 11 Mustangs to a lead that narrowly held up in a 6-5 win over No. 12 Sierra Canyon.

The Mustangs (9-4) were coming off a 15-13 loss at No. 10 Palisades and looking to shore up their playoff resume. Sierra Canyon (6-5) had lost three in a row to Top 10 teams and was looking to get back on the winning side.

Early on, Mira Costa made that difficult.

After the Trailblazers took and early a 1-0 lead on a goal from Isaiah Cree, Horowitz assisted Max Geoghegan 30 seconds later to even it up. Geoghan scored another, then assisted Horowitz to make it 3-1. Connor Barnes pushed the Mustangs’ lead to 4-1 heading to the second quarter.

Horowitz scored twice more in the second quarter, sandwiched around a goal from Sierra’s Matt Chopp, giving Mira Costa a 6-2 halftime lead, and that was barely enough.

Sierra Canyon, which was hindered by six first-half penalty calls and six minutes of man-down defense, shut out Mira Costa in the second half.

The Trailblazers pulled within 6-3 midway through the third quarter on an unassisted goal from Cree, then Mac MacLean pulled the Trail Blazers within two at 6-4 with 11:08 left in the game. The margin remained two for the next 10 minutes, when Chopp finally broke through with 1:11 to play, scoring his second of the game on assist from Cooper Endicott to make it 6-5. Sierra Canyon could get no closer.

Horowitz (3g, 1a) and Geoghan (2g, 1a) led the Mira Costa offense. Chopp and Cree scored two goals each for Sierra Canyon, and MacLean had a goal and an assist.