Mira Costa Bounces Back With 7-5 Win Over Crespi 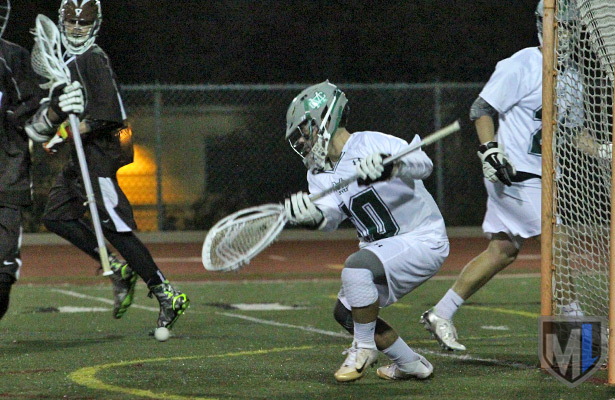 Goalie John Van Sickle made 11 saves, and preseason No. 6 Mira Costa rode a three-goal burst in the third quarter to beat visiting Crespi 7-5 on Thursday.

The margin would have been quite a bit larger if not for Celts senior goalie Noah Davila, who stopped 16 shots to keep Crespi in the game.

For Mira Costa, which has been playing without starting midfielders Zane Crandall and Hayden Frye, the victory helped shake off the memory of Monday’s opening-game, 8-6 loss at Corona Santiago. Both Crandall, who is committed to D-I Lafayette, and Frye, who is committed to D-III Eastern, are nursing knee injuries. Costa coach Aaron Karsh said Crandall is expected back in a week or so and Frye a few weeks after that.

In their absence Thursday, it was the first attack line that stood up. Senior Nash Hale and junior Ryan Gustafson scored two goals each, and sophomore midfielder Miles Choromanski also had two. Junior middie Chad Coons scored one.

Five different players scored for Crespi, which scored three times in extra-man situations but could generate little offense out of its six-on-six sets. Senior Jack Doyle had a goal and three assists. The Celts also were missing two starters, with defenders Ricky Hayashida (shoulder) and Adam Duke (concussion) sidelined.

Mira Costa led 3-2 after one quarter, but Doyle scored to tie it 3-3 at halftime. The Mustangs scored just 35 seconds into the third period to start a run of three unanswered goals — Gustafson from Frankie Maruyama, Choromanski from Casey Bonner and Gustafson unassisted — to take a 6-3 lead before Crespi got one back.

Costa again stretched the lead to three at 7-4 on Choromanski’s second goal, and Crespi could only get one back, with Dorian Ruh hitting an outside shot on a skip pass from Doyle. But that came with 7:14 to play, and the Celts couldn’t find the net again.