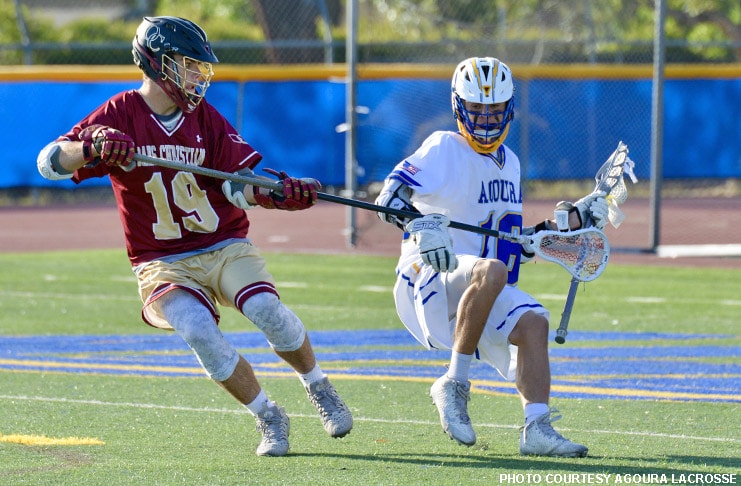 There were only minor changes in the MaxLaxLA/US Lacrosse coaches poll this week, with Oaks Christian and Agoura each moving up a spot with big Marmonte League wins and idle Santa Monica moving ahead of Crespi and into the No. 11 spot.

Palos Verdes (6-3) remains No. 3. The Sea Kings play host to Loyola on Tuesday.

With only three weeks left in the regular season, though, the real intrigue might be in the second half of the Top 20, where a number of teams will be scrambling for playoff spots. This week alone features a number of games that could weigh heavily in the selection discussion on April 30.

Monday: No. 13 Mira Costa at No. 16 West Ranch; Culver City at Palos Verdes.
Tuesday: West Ranch at No. 20 St. Francis; St. John Bosco at No. 19 Peninsula.
Wednesday: Culver City at No. 14 El Segundo
Thursday: No. 9 Chaminade at No. 14 Sierra Canyon; No. 18 San Marcos at Royal; Peninsula at Viewpoint.
Saturday: Servite (OC) at Peninsula.

West Ranch (6-5) has two chances this week to beat a ranked opponent. The Wildcats are 1-5 in such games this season, with two of the losses in double-overtime. A strong schedule-strength rating (No. 15 among northern division teams) will help, but it might not be enough without a quality win or two.

Culver City (4-6) and Peninsula (2-7) can insert themselves into the playoff conversation with a strong showing in the final weeks of the season, but that has to start this week. Culver plays at El Segundo, and Peninsula has three opportunities to post wins and balance its record.

Sierra Canyon (5-5) is likely to win the Gold Coast League and earn a playoff spot, but like West Ranch, the Trail Blazers could use a quality win to shore up their resume and avoid a potential pre-first-round or “play-in” playoff game. They play Chaminade on Thursday, then Peninsula next week.

St. Francis (5-9) likely will have to win at least four of its last five in order to be considered for an at-large spot, even out of the always tough Mission League. Beating West Ranch on Tuesday would be a good start.

San Marcos (9-1) has won nine in a row since a season-opening loss to Oaks Christian and is trying to earn its first playoff berth. Whether the coaches committee will grant the three-team Channel League — San Marcos, Santa Barbara and Dos Pueblos — an automatic berth or consider their playoff fortunes along with other at-large candidates remains to be seen. The Royals play at Royal on Thursday.