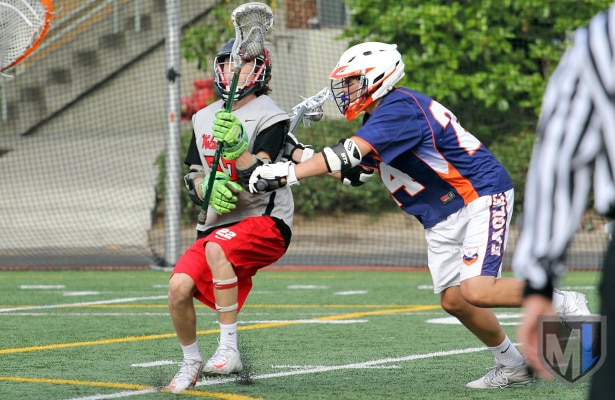 Defenseman Cole Millard of Chaminade and attack Cole Brennan of Cate School became the latest members of Team West Coast 2016 to announce their college choices, and they both chose NCAA D-III schools outside of Philadelphia.

Millard (pictured, above right) committed to Eastern University and Brennan chose Haverford College. The schools are roughly six miles apart in the western suburbs of Philadelphia, with Villanova sitting squarely between them. Eastern competes in the Middle Atlantic Conference, while Haverford is a member of the Centennial Conference.

“I am incredibly proud of Cole,”said Steve Lane, head coach at Chaminade and co-coach of Team West Coast. “He has faced a lot of adversity to get to where he is now. Every time I have seen him faced with a challenge, it always drives him to work harder. Difficulty will never slow him down, which is the exact reason why he is having the success he has now and will continue to in college. Cole will be our anchor this year at close D, and I couldn’t be more proud and confident knowing he will be leading our team into battle.”

Brennan, a small (5-foot-6) but quick and shifty left-handed attackman, led Cate to a 14-1 record last spring and was named Athlete of the Year in boys’ lacrosse by the Santa Barbara Athletic Round Table.

“Cole is a great example of a player who has worked hard over the years in the classroom and on the field to achieve this level of success,” said Justin Eaton, co-coach of Team West Coast 2016 said. “He was the leading scorer on our Class of 2016 team this past summer, and a driving force in our team finishing 8-1 at Battle of the Hot Beds in Delaware. His ability to finish the ball is impressive, and he has some of the best fakes we’ve seen anywhere.”