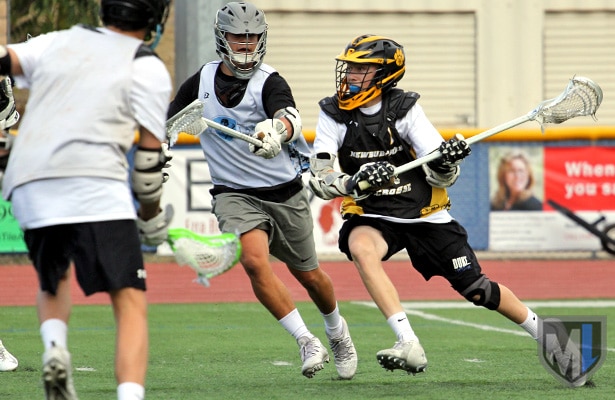 Newbury Park has named Mike Noble its new head lacrosse coach — the school’s third coach in as many seasons — but this transition should be pretty smooth. Noble coached the Panthers’ JV team last spring to a 12-3 record, and his son, Andrew Noble, is a junior midfielder on the varsity, so he is more than familiar with the Newbury program.

Even more, Noble has coached in the Newbury Park youth lacrosse program and also coaches in the high school’s football and basketball programs, so he also is no stranger to the school, the student athletes or the community.

Noble replaces Grant Kaleikau, who led the Panthers to a 14-5 record and a playoff berth last season. Kaleikau replaced Tim Penix, who had led the program for two seasons.

MaxLax managed to pin the busy Noble down long enough to answer a few questions via email:

MaxLax: You obviously are familiar with the school and lacrosse program. Have you hit the ground running, or is there much of a transition?

Mike Noble: “It’s been a very easy transition into my new role with the program. The energy has been positive from the players, parents, boosters, school administration and community. I’m fired up to continue with the growth of the program. Prior to officially getting the title ‘Varsity Head Coach,’ I along with a couple other coaches entered the JV and varsity boys in the LA Mavericks Fall League at Agoura.”

MaxLax: The Newbury Park program is loaded with talent; does that make your job easier or harder?

Mike Noble: “Definitely easier. This is why: I’ve surrounded myself with motivated and experienced coaches. The Players in the program are very mature, and everyone has an open mindset to improve as a team and individually. With the mindset to ‘FINISH’ (new motto), I hope to continue getting the boys physically and mentally stronger by at least 1 percent each day.

“The talented senior class knows what it takes to be successful. They’re hungry and focused.”

MaxLax: You are the third head coach the current juniors & seniors have had. Do you take that into consideration as you begin to establish your own program?

Mike Noble: “Yes I do. I frequently remind the kids, they are who they are now due to the village that helped nurture them. As for myself, I’ve taken many bits and pieces from the past two head coaches (Grant Kaleikau and Tim Penix) to help me grow as a lacrosse coach. I’ll take it even farther, from when most of these kids had great youth coaches. Chris Duffy, to name one. Taking the knowledge from them and from what I know from coaching football and basketball will hopefully translate into success with the NPHS lacrosse program.”