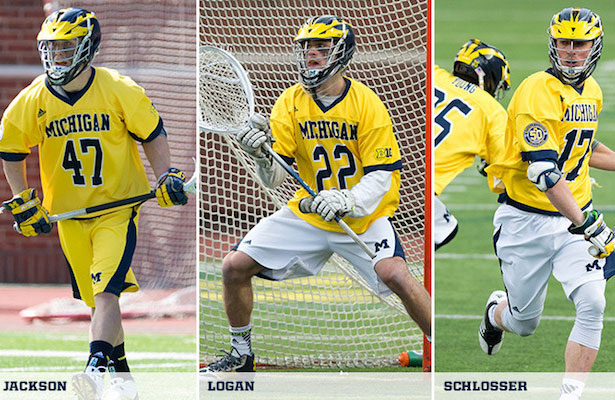 In just sixteen days, the Michigan men’s lacrosse team will play Delaware in the Orange County Winter Invitational.  Both teams have rosters loaded with talented, entertaining players.  The Wolverines will be bringing three players in particular that will be worth keeping an eye on.  Senior attackman Kyle Jackson, senior/junior goalie Gerald Logan and junior midfielder Mikie Schlosser were all placed on the Big 10 Players to Watch List.

The Big 10 is one of the most competitive conferences in the country with three teams (Maryland, Johns Hopkins, and Ohio State) ranked in the Top 12 nationally. So you know anyone making a Big 10 Players to Watch list truly is a player to watch.  The full press release from Michigan is presented below. Still haven’t bought tickets for the Orange County Winter Invitational?  Just click on the big red button.

ROSEMONT, Ill. — The University of Michigan men’s lacrosse team was selected to finish fifth in the 2016 edition of the Big Ten Preseason poll, the conference announced Monday (Feb. 1), in addition to the Player to Watch list.

Jackson, a three-year starter at midfield, will feature at the lefty attack spot as a senior in offensive coordinator Conor Ford‘s offense. The Sarnia, Ontario, native enters his final campaign as U-M’s all-time leading scorer with 58 career goals and 18 assists (76 points). Throughout his career at Michigan, he has been named as Team Offensive MVP, All-ECAC First Team, ECAC All-Rookie Team and ECAC Rookie of the Week. Last year, Jackson started all 13 games at midfield, was second on the team in goals (18), points (22) and shots (56) and had five multi-goal games on the year.

Logan owns the Michigan career goalkeeping record in nearly every category heading into his redshirt junior season. Last year, he started every game in between the pipes for the Wolverines, stopping 54 percent of shots faced and totaling an 11.60 goals-against-average. Logan also ranked in the NCAA top 10 in saves per game (12.84) and is a two-time team MVP (2013, 2015), an All-Big Ten honorable mention in 2015 and 2013 ECAC All-Freshman Team selection.

Schlosser, a Face-Off Yearbook Preseason All-Big Ten honoree, is the first junior team captain in program history. Last season, he was third on the team in goals (15) and in points (20), and he has started on the team’s first line midfield the past two seasons.

U-M opens the regular season Saturday (Feb. 6) at No. 6 North Carolina at 1 p.m. from Fetzer Field in Chapel Hill.