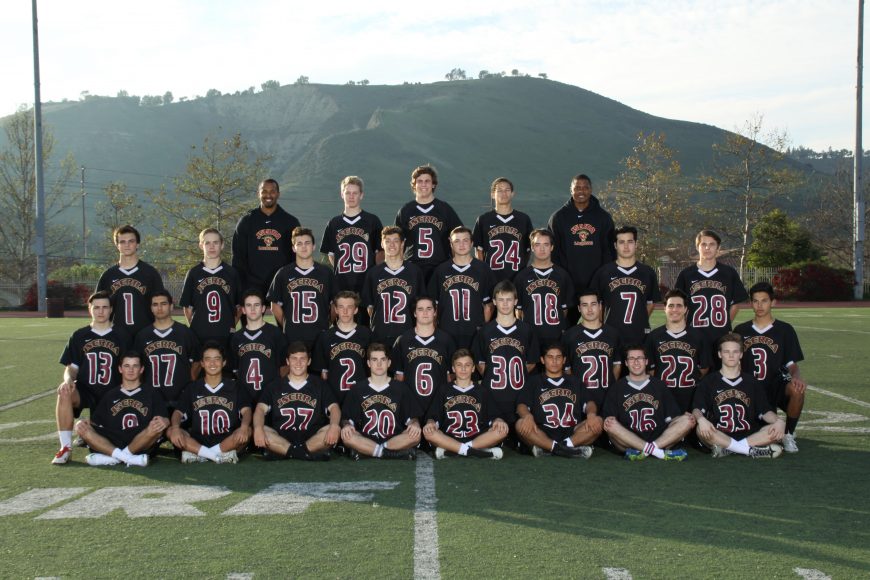 The J Serra Lions return to the finals for the second straight.  They got here by avenging a regular season loss to Foothill in the semi-finals.  Are the Lions peaking at the right time?  Meet the 2015 Lions below.

Matt Karzak is a 6’5 junior attack making his third appearance at CIF Lacrosse Finals. He was a freshman at St. Margaret’s and transferred to JSerra his sophomore year.
Matt loves history and the east coast. He was born in Wilmington DE and lived in Philadelphia till he was 8 years old. His family is from the Annapolis and Baltimore area.

Daniel Gallagher, a senior at JSerra has been with the Lions Lacrosse team for two years as an attack.  He is planning on attending Belmont University in Nashville, TN where he will study Music Business.  Daniel was born in Mexico City, Mexico and has dual citizenship in Mexico and USA.

Will Inman, a senior attack, will attend the University of Arizona in Fall.  Twin brother of Steve (JSCHS middie).

Sophomore Joshua Sanchez is a second-year, J Serra Varsity player. As an attackman, he has helped the Lions achieve the goal of playing in the CIF finals; both years. He is excited to train, and play back east, this upcoming summer. Josh is also looking forward to, two more successful years as a J Serra Lion! Josh also loves to snowboard, spend time at the beach, and hang out with friends and family.

Senior captain James Yanes will play at Hofstra University next year. He is Adrenaline All American and played in the Under Armor Underclass All American games last year.   He likes to snowboard ,ski, paintball, and have fun with his friends.

Junior Emerson Roth is a starting attackman and third year Lion lacrosse player.  He says is “Proud of our Trinity League Championship and proud to playing with this J Serra team in the play-offs”!

Sophomore Hunter Neal is a 3rd generation lacrosse player and 2nd year member of the JSerra Lion’s Varsity; Hunter will miss the team leaders.” I really like playing with our seniors. When you step on the field it goes into high gear. Its fast and intense. I like that alot. ”

Steve Inman, a senior middie will attend the University of Arizona in Fall.  Twin brother of Will (JSCHS attack).

Senior captain Logan Olmsted will take is game to Colorado Mesa in the fall.  He has earned four varsity letters in lacrosse.  He plans on studying Athletic Training in college. He enjoys shore fishing from the beach in his free time.

Senior captain Yuta Murata will move to the state of Maine in this fall to pursue his love of playing lacrosse at Colby College.  Yuta likes music and watching funny movies. He also loves eating, especially pasta and Japanese Ramen-noodle.  Yuta has been playing lacrosse since 5th grade.

Senior Captain Jake Schleppy is a member of J Serra Medical Magnet program.  Jake will pursue a degree in Medicine at High Point this fall, while also playing on the lacrosse for the Panthers.  Jake is an Under Armour All American and is the younger brother of JSCHS LAX Alum – Cole, who is currently playing at Colorado Mesa University.

Senior goalie Beau Largent has been playing lacrosse at J Serra three years. His business Laxsplat is a partner with THE LACROSSE NETWORK. He will be attending  University of South Carolina and studying business.

Logan Carroll, a junior, has played mid for the Lions for the past three years. He plans to study business with an emphasis in entrepreneurship upon graduation in a year. Other than lacrosse, Logan’s passion is surfing.

Junior midfielder/faceoff Austin Shackleford is a two year starter for the Lions.  He has been playing lacrosse since 4th grade. People call him Shack and he enjoys Wing Stop.

Jackson Russell has been playing lacrosse since 5th grade and has played with most of his J Serra teammates since that time. Having played on the varsity squad since his Sophomore year, he has confidence in his chosen position of defensive midfielder. His background in ice hockey and his quickness has allowed him to man up to even the toughest attack players in the West.  His years at J Serra Catholic High School playing with this squad, while being coached by Kyle Harrison and Andrew Casmir, has been an incredibly memorable experience. Winning the ring would be the storybook ending to a fantastic high school experience.  Jackson will be a Wildcat at the University of Arizona in the Fall. His hobbies include surfing and anything in the water.

Senior middie Guy Malcolm is a dual-sport athlete.  He played four years of football for the Lions.  He will study pre-law at the University of Santa Clara in the fall.

Junior LSM Cayson Fincher transferred from St. Margaret’s in the fall.  This is his first year playing with the Lions.

Senior LSM Joey Luna is another football-playing Lion.  He will attend Saddleback College in the fall.

Sophomore defense man Shawn Rodriguez is a transfer from Dana Hills.   During the off season, Shawn enjoys playing club lacrosse for 212 Lacrosse out of Utah, Brady’s Bunch and 3d. He looks forward to attending Mavericks Showtime in CT this summer and hasn’t yet chosen where he’ll attend college. Outside of the lacrosse Shawn enjoys concerts, movies and playing guitar.

Senior defenseman Matt Saad will be attending the University of Arizona in the Fall.

Senior Captain Nick Georgagi is a four year varsity player who will attend and play lacrosse at Colorado Mesa in Fall 2015 majoring in Business Management..   Nick is an avid BOSTON Sports Fan and thinks Tom Brady is innocent!

Senior Captain Kennedy Solomon will be attending UMBC in the fall and continuing his pursuit in the medical field. Kennedy has been a type 1 diabetic since the 6th grade. Kennedy has a passion for talking to younger kids diagnosed and is currently trying out for a college program called team type-1 that is a mentoring program for young athletes.

Junior Defense and LSM  Kyle Tweidt will be entering his senior year this fall with plans on going on to become a mechanical engineer. He loves the game of lacrosse and plans to play lacrosse in college at the club level. His favorite food is porterhouse steak and tri-tip.

Senior defenseman Rhys Spierkel started playing lacrosse  in fourth grade. In his Ffreshmen and sophomore years he put his time and effort into wrestling for his high school. As a junior he moved to JS high school, joining the lacrosse team in his senior year. Rhys was born in Ottawa, Canada. Moved 9 months later to live in Singapore for 2 years, Belgium for 5 years before moving to OC in 2004.  He is off to TCU to study International Business. Rhys does not miss an episode of the BBC hit program “Top Gear”. He knows everything is to know on cars, especially luxury sports cars!