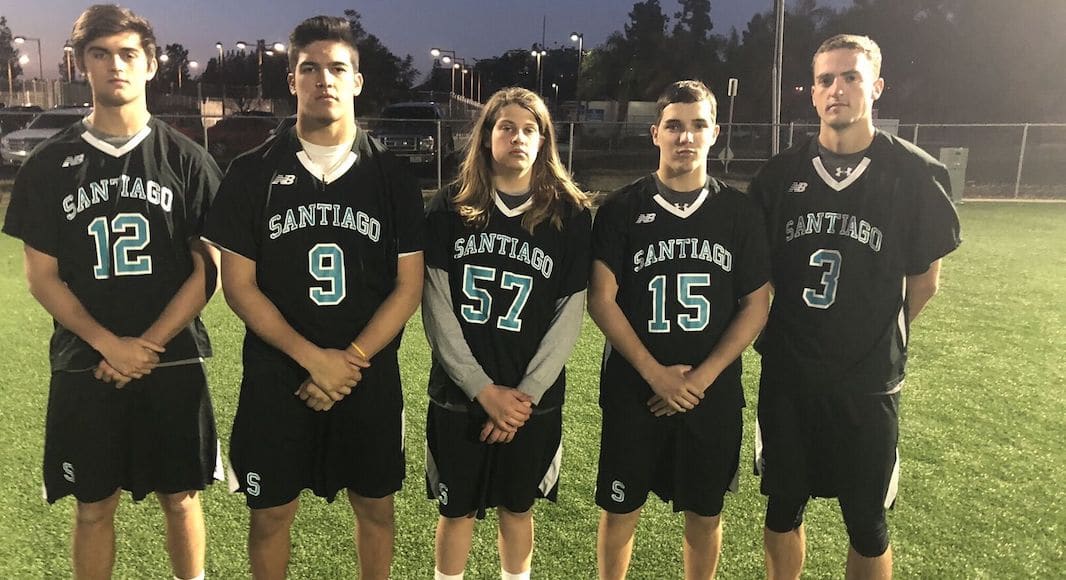 “All five of these captains are outstanding leaders, gifted lacrosse players, and scholar-athletes,” said Parr by email. “They each bring a unique skill set and personality that complement each other as leaders on the field and that will strengthen the direction and success of our team. They have rightfully earned the trust of their teammates as well as their coaches. I am very honored to have these five young men represent the Santiago lacrosse program this season.”

Parr on Benso: A four-year starter, he has consistently been an offensive leader on the field, a leader in goals last season and a driving force in assists for our offense. He solidifies our attack with his strong left-hand shot. Benso excels as well in his drive to be a scholar-athlete.

Parr on Burr: A four-year varsity player and three-year starter, Burr is Santiago’s lead defensemen this season and one of the leaders in caused turnovers last season. He can play multiple roles on the field, including LSM and close D and plays a vital role as the last line of defense in our games. He is committed to play Division III lacrosse next year at Augustana College, IL.

Parr on Hamilton: Santiago’s 2016 Most Inspirational Player, a four-year starter, and two-year captain, he was the leader in ground balls last season and came away with 73% success at the faceoff X. That winning percentage has consistently contributed to the team’s offensive success. He is a midfielder that works both sides of the ball. Hamilton is a true leader on and off the field with his work ethic and positive attitude.

Parr on Santana: A four-year starter and Santiago’s 2017 Offensive MVP, he led the team in points last season and is our all-time points leader. Santana, who also excels on the football field, is a physical player and a dominating presence on offense. He leads the team with his passion for the game and drive. He is committed to play Division l lacrosse next year at The University of Utah.

Parr on Yost: Santiago’s 2017 MVP and a three-year varsity starting goalie, he is the quarterback of our defense. With a 54% save percentage, Yost continues to be the difference in tough games. His success in the goal has contributed to the success of the team. His humble approach to the game makes him a respected leader on and off the field.