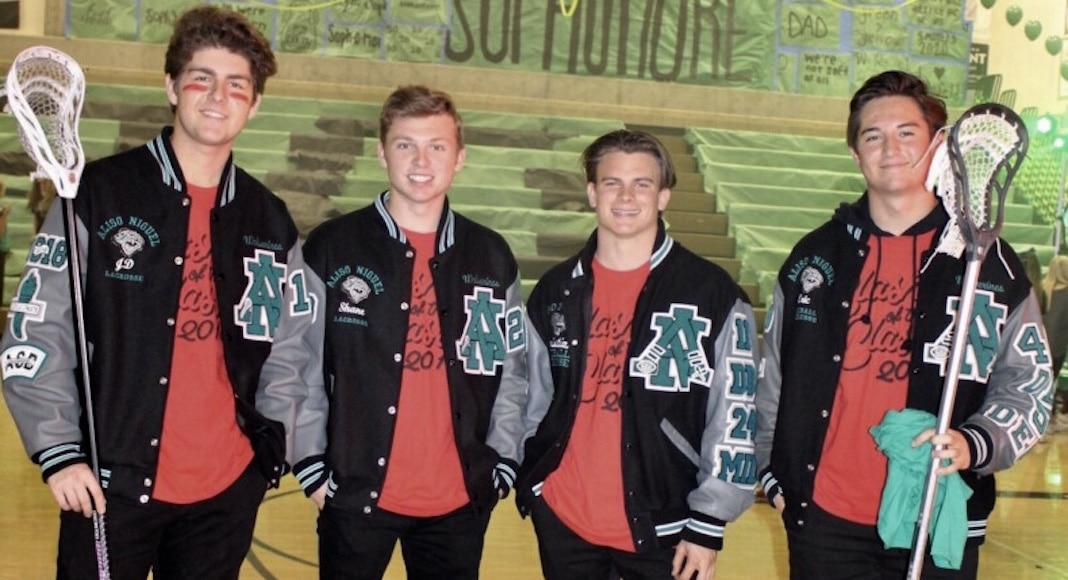 Christian Hovey: Christian has been a part of the ANHS lacrosse program since his freshman year and is a two-year captain.  Along with lacrosse, Christian has also played football for Aliso since freshman year and was a captain his senior year.  Balancing sports and school, Christian has received a scholar-athlete recognition all 8 seasons at Aliso.  Recently, Christian was awarded Scholar Athlete With Character and Honor by the Orange County Athletic Directors Association.  In the upcoming fall, Christian hopes to study Environmental Science at a PAC 12 university in the fall.

Shane Styskal: Shane has been a part of the ANHS lacrosse program since his freshman year. He served as a captain on JV his sophomore year and helped to lead them to a south coast league championship. He is looking to do the same this year after falling short the past few years at the varsity level. Shane frequently volunteers and also love to help out the younger guys in the program. He has been a scholar-athlete all four years at Aliso and plans to play club lacrosse and study finance in college next year.

JD Tschopp: JD started playing lacrosse his freshman year and has progressively worked his way up to becoming one of the focal points of the varsity starting defense. JD is a consistent scholar-athlete who is also a part of Aliso Niguel’s ASB. Outside of school, JD regularly volunteers with The Jessie Rees Foundation in order to provide care to child cancer patients across the world. In the fall, JD plans on attending a competitive four-year university to study business management or communications.

Eric Watkins: Eric began playing lacrosse the spring of his freshman year at Aliso. Along with lacrosse, he played football all four years and is currently the athletics commissioner on ASB. Balancing both his school-work and sports, Eric has received scholar-athlete all seven seasons of playing sports in high school so far. He was nominated and awarded the National Football Foundation Scholar-Athlete Award following this past football season. In the fall, Eric plans on attending a four-year university to major in mechanical engineering.