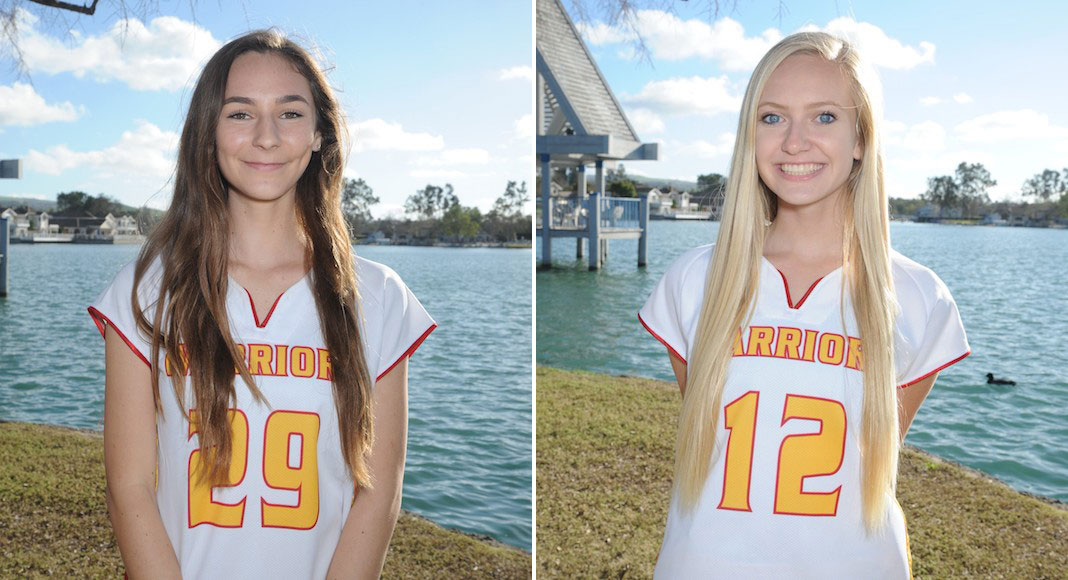 Seniors Jelena Pompay and Hope Hofseth will serve as Team Captains for the 2018 Woodbridge Warriors.

Pompay (left above) is a returning 1st Team Pacific Coast All-League midfielder and the team’s best two-way player. Last year as a junior, Pompay received the Bushido Award as the varsity athlete who best represented the values of the program – “The Way of the Warrior.” She also led the team on the field, scoring 17 goals, forcing 8 takeaways, and winning 26 individual draw controls. This year will be Pompay’s third as a varsity starter, having earned the team Rookie of the Year award her sophomore season. She has also earned Scholar-Athlete distinction all three years by earning her varsity letter while maintaining a GPA above 4.0.

Hofseth (right above) is an athletic and versatile attacker and two-year varsity starter and letter winner. Her vocal presence is key to organizing the Warrior attack, and she was second on the team in goals scored while leading the team in shooting percentage last season. Hofsethexcels in the classroom as well, having earned Scholar-Athlete distinction both of her years on varsity. Prior to her run on varsity, she was a JV captain and MVP.

Coach Davis Quote: Both Jelena and Hope are remarkably intelligent and positive young women. Last year our program faced some adversity both on the field and culturally, and Jelena and Hope’s genuine and open leadership has done so much to heal our team and bring joy to our daily effort. With almost half our Varsity roster this season being sophomores or younger, our captains have brought their teammates together and worked hard to bridge any upperclasswoman – lowerclasswoman divides. We are excited to be led onto the field by Hope and Jelena this season!