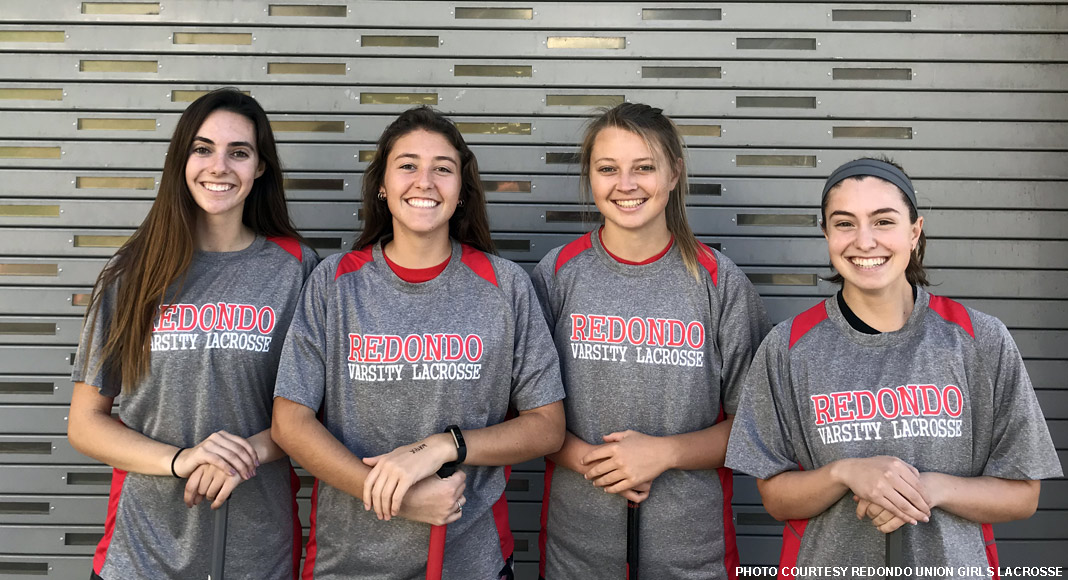 The Redondo Union girls lacrosse team, the defending LA champion and ranked No. 1 in the US Lacrosse/MaxLaxLA preseason coaches poll, heads into the 2018 season behind four veteran captains, three seniors and a junior. From left, above: Senior Alison Shafer, senior Maddie Marcon, junior Emma Hodges and senior Lisa Diethelm.

Alison Shafer, senior, midfield: Alison led the team in scoring in 2017,
when RUHS won the North Division for the fourth time. She is a versatile
player with a great feel for the game. She was named US Lacrosse All-American for greater Los Angeles as a junior in 2017 and was first-team All-Area as a sophomore and junior.

Maddie Marcon, senior, defense: Maddie is starting on defense for the third year, bringing strong stick skills and great leadership to the defensive unit. She was named second-team All-Bay League in 2017 and played a key role for
Redondo’s defense with her quick double teams in the North Division championship game.

Emma Hodges, junior, midfield: Emma is a dynamic midfielder with great
speed and a accurate shot. She was the Sea Hawks’ second-leading scorer last
season. In the North division championship game last year, she scored four goals
and recorded three assists. She was named first-team All-Area and All-Bay League in
2017 as a sophomore. She has great passion for the game and hustles on every play.

Lisa Diethelm, senior, defense: Lisa is capable of changing the flow of
the game with her dynamic speed and ground ball skills. She was the
key to Redondo’s defense in last years LA final, holding Chaminade’s top
scorer without a goal. She made All-Area second team and All-Bay
League first team in 2017.