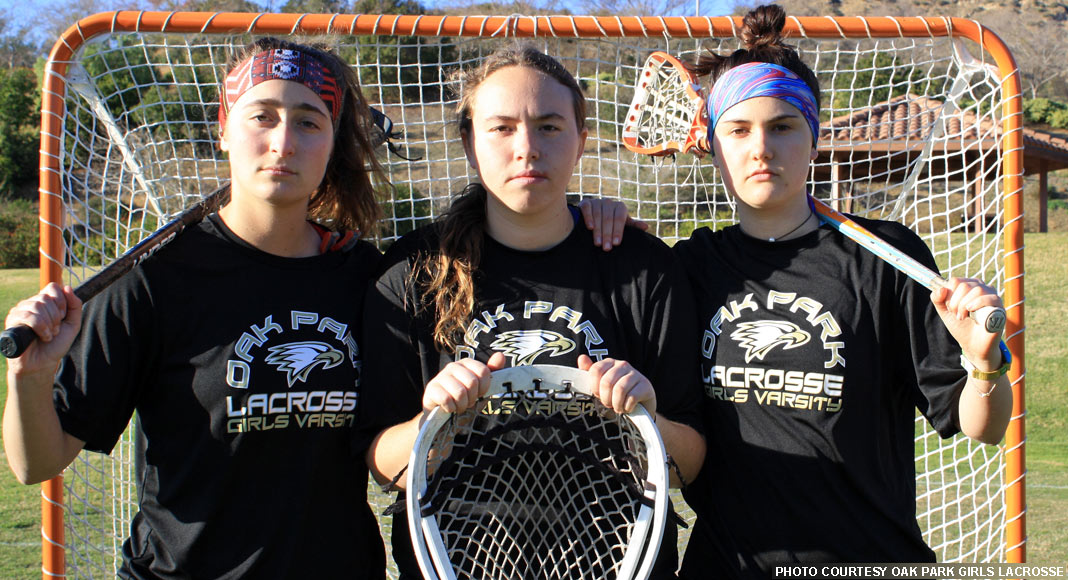 The Oak Park Eagles girls lacrosse team, ranked No. 6 in the preseason coaches poll, will be led in 2018 by their three senior captains, midfielder Yael Kaufman, goalie Alexis Robinson and defender Harper Wayne. All are four-year varsity letter winners, and the Eagles will go as far as their captains lead them.

These three players are phenomenal athletes and lacrosse players, and they’ve proven that on the field over the past three seasons. But they’re even better individuals off the field, providing constant mentorship and leadership to the underclassman while also volunteering their personal time to instruct and coach middle and elementary school players in the game of lacrosse. They have brought a focus and an attitude to this team which should make for a very exciting year at OPHS.

Senior Yael Kaufman gets up and down the field as well as any midfielder in the league, and she brings intensity to both the offensive and defensive ends. She has been recognized with numerous athletic honors, include US Lacrosse all-area honorable mention during her freshman year, as well as the Eagle Award for team leadership during the 2017 season. Her achievements on the lacrosse field are rivaled only by her achievements in the classroom, where she has earned recognition as a Gold Honor Roll student as well as membership to the California Scholarship Federation. After her time at OPHS is done, Yael will continue her academic career in college where she plans to study journalism or film and TV production.

Senior goalie Alexis Robinson is a name widely recognized across Ventura County and Southern California lacrosse. In 2017 alone she was awarded Athlete of the Week honors by the Ventura County Star, was chosen as the Team MVP for the OPHS girls lacrosse team and was named the U.S. Lacrosse Greater LA Defensive MVP for the 2017 lacrosse season. Alexis plans to study history in college and work towards becoming a history teacher and lacrosse coach.

Senior defender Harper Wayne is the heart and soul and on-the-field general for the Oak Park defensive unit. Also widely recognized for her athletic accomplishments, Harper was named as the Eagles Defensive MVP for the 2017 Season and made honorable mention for the 2017 All-Northern Division Team. She stays just as busy in the classroom and is a senior staff writer for “The Talon” school paper. After high school, Harper plans on attending college to study journalism.