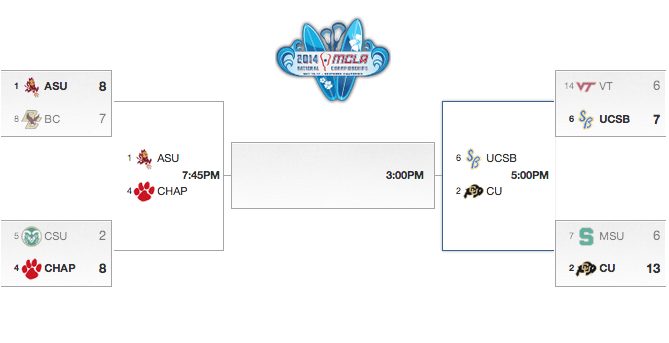 Four teams from west of the Missisippi River, ASU, Colorado, Chapman, and UCSB have advanced to the Final Four of the 2014 MCLA Tournament Thursday at Ernie Chapman Stadium.

The No. 1 seeded Arizona State Sun Devils had a close call with the 8th seeded Boston College Eagles in Tuesday’s Semifinal matchup. BC had the lead twice in the early goings and closed a late deficit to pull within one with minutes to go 8-7. They had a final chance to knock off the favorites with 32 seconds left and the ball but could not manufacture the tying goal.

2nd seeded Colorado Buffaloes avenged their regular season loss by defeating the 7th seeded Michigan State Spartans by a healthy final of 13-6. Earlier in the season MSU handed the Buff’s their first loss 11-10 at home. ASU was responsible for the only other loss of their season the following week. Since their loss to ASU, Colorado has been unstoppable cruising to a RMLC Championship.

The 5th seeded Colorado State Rams saw their two-year reign as kings of the MCLA come to an end on Tuesday evening as the 4th seeded Chapman Panthers pulled away for an 8-2 victory in the quarterfinal round of the national tournament. The Rams fell behind early and were unable to find the necessary offensive rhythm to muster a comeback attempt as Chapman slowly mounted its lead.

6th seeded UC Santa Barbara battled through its first two games, coming up with two overtime victories against rival Cal Poly SLO in the first round, and Virginia Tech in the second round. UCSB had previously beaten VT 5-4 at home and edged the Hokies this time in six overtimes 6-5.

Chapman will have home field advantage for the semifinals against ASU today at 7pm. The University of Colorado and UC-Santa Barbara will meet on the other side of the bracket at 5pm for the right to play for the MCLA national championship on Saturday evening.

Reserved seating tickets are sold out and general admission are almost sold out! Get them HERE for tonight’s semifinal and Saturday’s championship games before they’re gone.