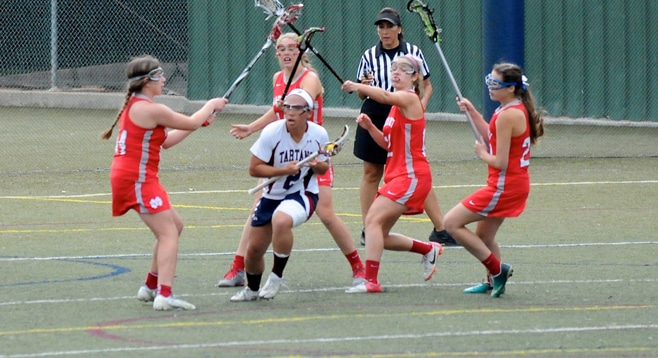 April 19, 2014 – St. Margaret’s standout Noelani Murayama has been selected as the MaxLaxOC Girls’ Player of the Week.Coach Holly Reilly has this to say of Noelani: “Noelani Murayama has been an outstanding player for the Tartans so far this season. She leads the team with 47 goals and 60 draw controls. She is also a defensive wall. Noelani is one of those players who brings 110 percent by working hard day in and day out. She is a caring and unselfish teammate who is always looking to set her teammates up notching eight assists on the season thus far. Most recently, Noelani helped to lead the Lady Tartans to strong wins over Mission Viejo with five draw controls, one ground ball, two caused turnovers, and four goals and against San Clemente she had four draw controls. Murayama is a catalyst to making it all come together for her Lady Tartan lacrosse team. Her presence elevates the level of play on the field and she leads by setting a strong example of hard work and perseverance.